According to the media, deposits now are open on CoinZest- an exchange platform that got approved by the Korean government.

The exchange allows traders to make transactions with KRW/PAT, the thing that can expedite the expansion of PATRON/PAT in the Korean market, as per financial observers.

In parallel, the PATRON/PAT has reportedly raised above 30% today.

The reports informed earlier that CoinZest had announced in a tweet on Oct. 16 that it was on the CoinMarketCap, the step that the exchange considered to have come as a result for their endeavours to join the global market.

The move comes after the exchange had carried out many meetings and held public events, including one for “BAAS straight purchase”.

At press time, Coinzest has welcomed its existing customers and all other interested parties to join a meet-up on the 23rd of October at the Grand Ballroom of Dragon City Hotel, according to the Hankook Blockchain News.

More than 500 blockchain specialists and cryptographic investors will attend the event, in addition to CEOs of five large international fund management firms.

Coinzest will announce in the event a concrete roadmap for entry into the foreign exchange market.

The exchange reportedly cooperates with global financial investment institutions and plans to establish a crypto exchange in five major countries.

In an interview with HBNnews.com, Coinzest stated: "We are planning to introduce the COZ coin system. The five foreign countries that we are promoting are the Americas (US), Europe (Switzerland and Russia), the Middle East (Dubai). We are planning to extend the benefits to existing customers through cooperative systems between Coinzest and foreign exchanges."

It is worth mentioning that CoinZest is one of the twelve exchanges that have been approved by the KBA (Korea Blockchain Association), and one of the three biggest exchanges in Korea.

The KBA has been trying to back up self-regulation since last year, where

14 crypto exchanges out of 23 in that time voluntarily accepted the inspection.

According to the technical charts, the PATUSD pair is highly bullish and trending upwards. However, the coin might make some correction towards the $0.016630 strong resistance level as most of the indicators such as STOCHRSI(14), William%R and CCI(14) signals that the coin got overbought. 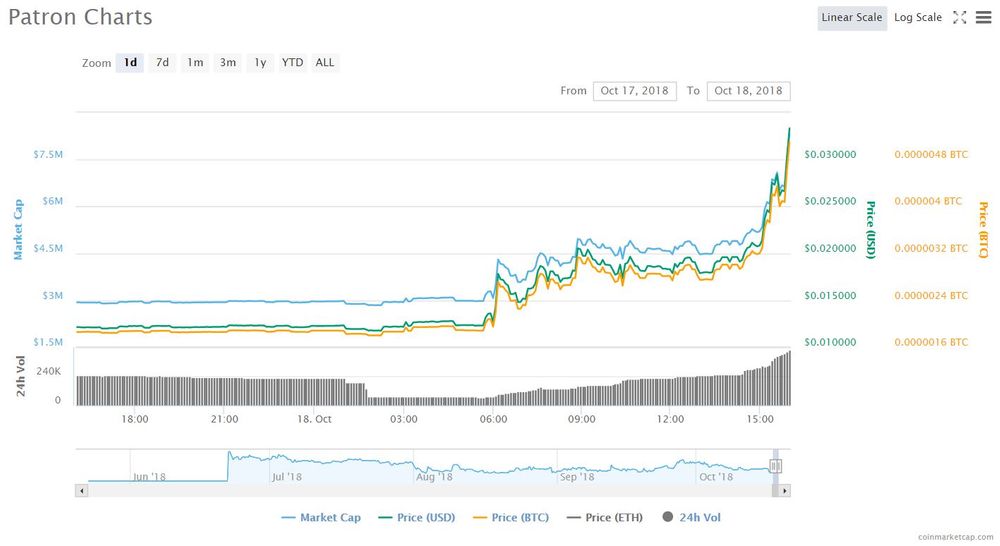 But considering the SMAs, the 100 SMA line is still above the long-term 200 SMA line which indicates that the path of least resistance is to the upside. Thus, we might expect the pair to outperform in the short-term as traders are more willing to buy or hold rather than sell.

The market analysis was provided by Amandeep Sonewane.

Quyen Nong contributed to the translation