13 September, AtoZForrex.com, Vilnius – OPEC attempts to seize the Crude Oil price control from China has temporary worked, resulting in $10 rally. Yet, with Crude glut estimated to persist into 2016 and no end on sight for China’s economic slowdown, Oil prices remain to drift lower, despite House GOP vote to extend Iran’s sanctions.

Following a technical rally to 61.8% Fibonacci retracement zone after a reversal from a custom Fibonacci 110% retracement level at 48.15 and 37.7 respectively, the black gold became trapped between the Fibonacci 61.8% and $44 renitent boundaries.

Based on Fibonacci guidelines and 50 & 200 downward slopping SMAs on all major time-frames, a runner-up move falling on a custom 88.2% Fibonacci retracement level should follow. We could view a daily candle closing below the lower 44 boundary as a confirmation omen. 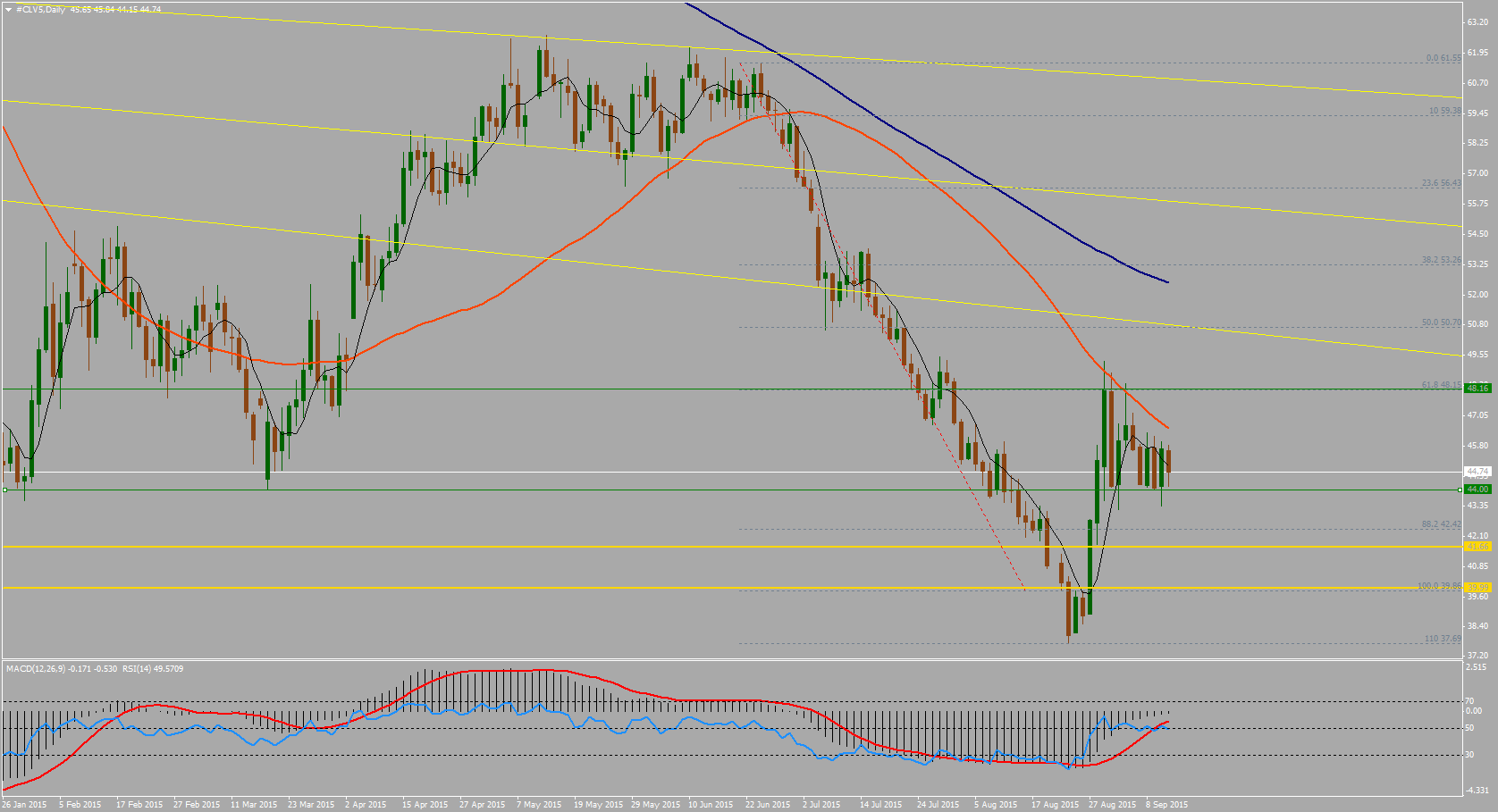 Despite a bullish divergence indicated by MACD, RSI keeps forming lower lows and lower highs while pivoting around a neutral 50 level. Hence, as the indicators send us mixed signals, it’s to better neglect the tools and turn to more reliable market measures, as described above.

Doing simple fundamental data crunching: average demand for Crude Oil over four quarters until Q3 2016 is estimated by the International Energy Agency (IEA) at 95.13 million barrels per day. Yet, the current Q2 2015 supply is at 96.31 mb/d. This makes a 1.18 mb/d surplus, even with the best case scenario estimation when, in 2016, non-OPEC members will be forced to cut inefficient Oil supply by nearly 0.5 mb/d and the same inefficient source cut would imply to the US possibly resulting in 0.4 mb/d decrease, we are still in a glut of 0.28 million barrels per day.

Not to mention China’s economic slowdown decreasing the demand and a possible Crude supply overflow of 0.4-0.7 mb/d from Iran, on top of a release of 20 – 40 million barrels from a floating storage, as the debate for the sections is likely to persist until the turn of 2016.

Looking closer in time, the Fed interest rate decision is due on September 17. Although the policy makers were leaning towards September lift-off, the date has been already disregarded by market participants and both the IMF and the World Bank. Should we witness a confirmation of withhold, Oil prices would soar higher.

Aligning both technical and fundamental analysis, we could position for a fall to 88.2% custom Fibonacci retracement level at 42.42 ahead of the Thursdays event. After the described confirmation, the opportunity should account for roughly 130 pips.

Going into the FOMC, we could bet on a price soar higher towards the $48 higher boundary, then $50 major psychological resistance and lastly to the initial target at Fibonacci 38.2% retracement level at 53.3, based on the fundamental anticipation and Fibonacci guidelines. The complete set amounts to 1200 pip opportunity.

Nonetheless, the ongoing Oil glut will resist the outlook, especially with a removal of Iran sanctions and obscure Chinese developments. Therefore, after the technical rise backed up by the Fed anticipation, Oil will resume the underlying downtrend possibly reaching $33.5 zone.

Considering that the OPEC will not eliminate the production surplus to preserve Russia’s economy in recession, while the disputes with Ukraine continue. Nonetheless, the Russian Government and the Would Bank project the recession to continue throughout 2016.