OPEC oil cut expectations drive the oil prices up. Moreover, the delay in the crude oil supplies from Libya and the weak USD backed the oil prices. What is in the future for black gold?

19 December, AtoZForex – Oil prices advanced on Monday on the prospects of tighter 2017 market. Moreover, weaker USD and the delay in the new Libyan oil exports have supported the oil.

Brent crude futures were changing hands at $55.47 per barrel at 0946 GMT, up 26 cents from the previous session. US West Texas Intermediate (WTI) futures were trading at $52.20 per barrel, up 30 cents. Market analysts believe that oil gains were mainly driven by a delay in the crude oil supplies from Libya. 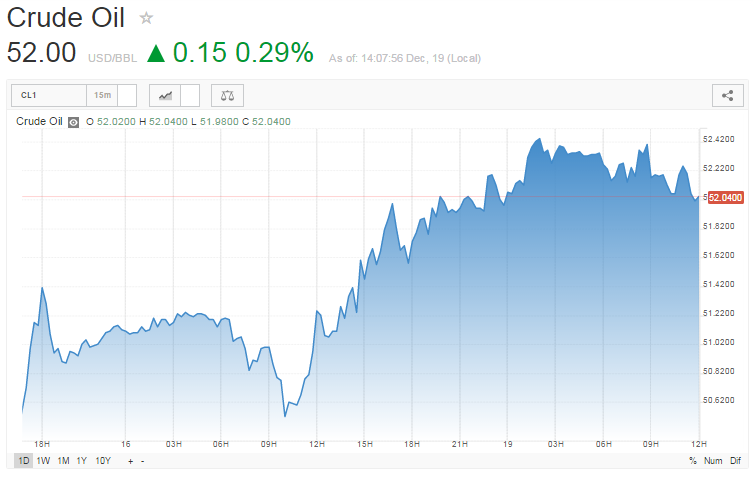 The analyst with PVM Oil Associates, Tamas Varga, has commented:

“It looks like the Libyan story and the weaker U.S. dollar are counterbalancing bearish factors. We should expect higher prices in the near-term future.”

Earlier last week, Libyan group responsible for the oil infrastructure informed the public it has reopened a long-blockaded pipeline. This pipeline is leading from the oilfields of Sharara and El Feel. However, a separate group had restricted a reopening of the El Feel oilfield production.

Moreover, the US dollar has dropped versus a basket of six major currencies. Last week, the dollar index has peaked at 14-year high, reaching 103.56 level. As a fact, strong USD makes oil more expensive for holders of other currencies.

Will Oil rally be limited?

Some experts anticipated that the oil prices to rally further in 2017. This is due to the fact, that the members of Organization of the Petroleum Exporting Countries (OPEC) and non-OPEC countries have agreed on the oil production cuts. The total planned oil output cut in accounting for as much as 1.8 million barrel per day. Australia and New Zealand Banking Group has stated:

“With investors now expecting a relatively high level of compliance with the production-cut agreements, prices should be well supported.”

In spite of this, there are some factors that are limiting the further gains in oil prices. One of these factors is the addition of 12 oil rigs in the week to Dec 16. Currently, the total number of rigs in totaling at 510, the highest number since January. As an outcome, the US oil production is headed up. It has risen from below 8.5 million barrel per day in July to almost 8.8 million barrels per day in the mid-December.

Fed: The Taper Will Have a Reduction–The Rates Will Not Go Up
Forex Crypto
Top 5 Forex Brokers
Top 5 Crypto Exchanges
Your subscription could not be saved. Please try again.
Thank you for subscribing. You will be the first to receive all the latest news, updates, and exclusive advice from the AtoZ Markets experts.
Everyone is reading
The Legal Battle Between the SEC and Ripple Continues
Binance Cancels Cryptocurrency Trading in Australia
Judge Denies Ripple's Request for SEC Employees’ Crypto Transactions Disclosures
close ×