1 December, AtoZForex – The USD hits 9.5 months high versus the Japanese yen on Thursday, as oil prices soared in the wake of successful OPEC oil cut deal.

The greenback reached new highs today, as expectations of inflation and US bond yields have risen following the OPEC oil cut. The future US Treasury, Steven Mnuchin, did not provide any signs of worries over the firm USD. This triggered traders’ appetite for the US dollar. Mr. Mnuchin stated on Wednesday that the administration would make tax reform and trade pact overhauls key priorities. He also has outlined Trump’s plans with Wilbur Ross.

The dollar index, which is measuring the USD versus six major currencies, has appeared steady at 101.42. Yesterday, it rose to 101.83.

The rally for the greenback came as oil prices soared to around 9 percent on Wednesday after oil cartel has agreed on the production limit. The oil cut deal appears as the first reduction in oil output since 2008.

The surging oil pushed higher the inflation expectations. This, in turn, has supported the US Treasury yields. The higher Treasury yields triggered the appetite for the USD relative to currencies such as yen and euro. This is due to the fact that their government bond yields are still low-to-negative.

The greenback has advanced significantly versus the yen, reaching a high of 114.83 yen on Thursday and marking its strongest level since mid-February. The chief currency strategist at Mizuho Securities, Masafumi Yamamoto, has commented:

“I think it is just a matter of time that the dollar will test 115 yen after Mnuchin was silent about the dollar’s strength.”

The Japanese Yen was dragged down by the Bank of Japan’s (BoJ) policy of managing long-term bond yields. The EUR gained to 121.55 yen, marking its highest level since 24th of June. This shift came even though the currency was weakened ahead of Italy’s upcoming referendum on Sunday. 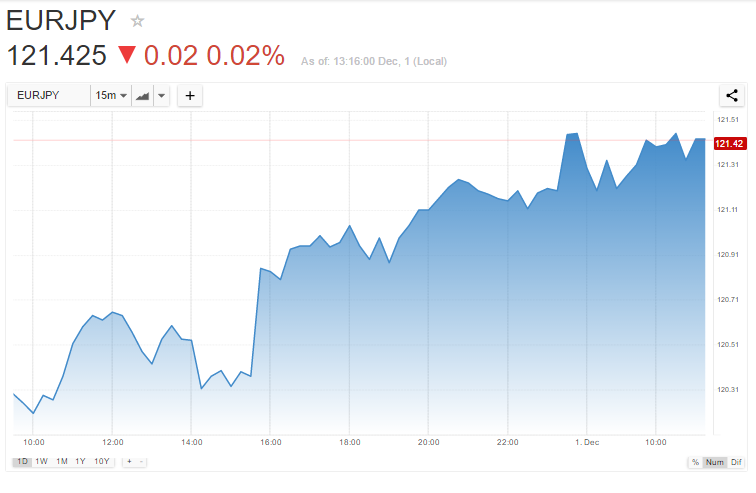