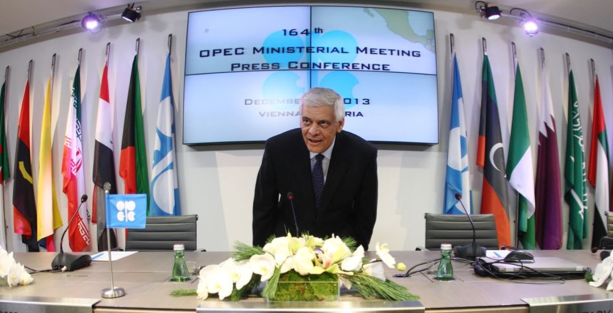 AtoZForex.com Amsterdam — In anticipation for verdicts of the OPEC meeting of tomorrow, crude oil has declined further. As the international benchmark, Brent crude dipped by 2 percent and lies now about the level of $62.48 per barrel. Despite of public talks of certain OPEC members late yesterday about a new “fair” price for crude oil.

Tomorrow in Vienna, the 12-member oil organisation OPEC will finally hold the high profile meeting. As earlier reported, it is widely expected that the OPEC will remain the 30mln barrel a day output, in order to maintain the markets share. Even though analysts have opined that the OPEC is already pumping more barrels a day, estimating at 2 millions more on daily basis.

As mentioned above, the latest oil price decline of 2 percent is remarkable, certainly after the indications of some OPEC members publicly stating that for the first time a new “fair” price will be introduced. According to the oil ministers of Iraq, Angola and Venezuela, this particular new price will range between $75 or $80 a barrel. Interestingly, it will be a mark up of barely $15 with the current ongoing prices for Crude Oil. The Iraqi oil minister, Mr. Adel Mahdi indicated that a price within this particular range will be “equitable”.

However, the question now is if the remaining members of the OPEC will think alike and enact this new “fair” price? As OPEC Meeting fears emerge, the market has responded accordingly. The latest decline in crude oil prices may signals the public uncertainty about these statements of a new “fair” price from the number of oil ministers. Another given fact is that at the time of rolling out these statements by the oil ministers, Saudi Arabia did not concur or comment at all on the public talks about the new “fair” price.

It’s a known fact that Saudi Arabia has for years opined that the pricing of a crude oil barrel should be at $100. Hence, with no proof of Saudi Arabia changing this fundamental view or backing up publicly the new “fair” price, it’s possible that these stated prices by the oil ministers will be forfeited tomorrow.