OPEC meeting developments: Oil prices soar on the increasing expectations of the finalization of the oil cut deal. Where the prices of oil will be headed after?

30 November, AtoZForex – Oil soared more than 7 percent on Wednesday following the positive remarks by the Saudi oil minister. He has stated that the agreement between the members of the Organization of the Petroleum Exporting Countries (OPEC) is close.

While OPEC members set a positive tone for their meeting in Vienna, oil prices soar. Brent crude futures rose $2.72 on the day to $49.10 per barrel by 0930 GMT. West Texas Intermediate (WTI) oil extended gains and broke through $48 per barrel level, marking 6-day peak amid advancing odds of an output cut agreement at today’s meeting. Later during NY session, traders will face the official EIA report on US domestic crude supplies. 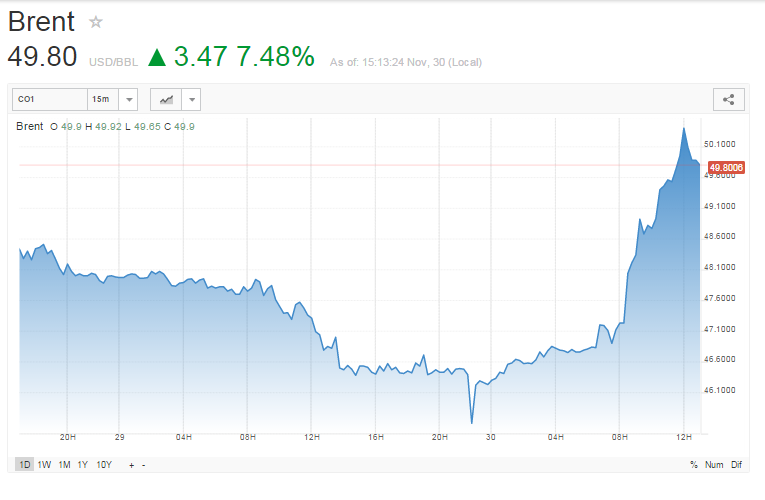 Currently, oil prices are fluctuating around $49 level, while the Saudi Energy Minister Khalid al-Falih has signaled that the country is ready to accept Iran output at pre-sanctions levels. The remarks added to widespread upbeat sentiment around the oil led by Iraqi oil minister’s comment that the country has agreed to limits its production.

Khalid al-Falih has indicated that he believes the market’s fundamentals were shifting in the right direction. However, he believed the oil cartel was “getting close to a deal”.

What to expect after OPEC meeting?

OPEC members are currently holding the meeting in Vienna in order to decide on the details of the oil cut deal, designed to rebalance the oil markets and boost the oil prices. Tamas Varga, PVM Oil Associates analyst, has stated:

“The extent of the (price) move shows no one wants to miss the boat. There must be a general consensus that there will be a cut, whether it’s going to be bullish, I don’t know, but it’s the domino effect.”

Market experts believe markets are nervous ahead of the meeting’s results. Additionally, they anticipate the oil prices to sharply swing depending on the result of today’s meeting.