Market experts believe that in spite of OPEC deal Crude oil prices will not reach desired levels. Oil bloc members might have to prolong the oil cut deal.

21 April, AtoZForex – Members of the Organization of the Petroleum Exporting Countries (OPEC) and Russia will meet next month to discuss the progress of their oil cut deal that started in January 2017. Meanwhile, market experts believe that oil producers might face the new surprising challenge. Analysts predict an increase in the oil stockpiles from the levels of the pre-oil cut deal.

Initially, oil stocks were declining. However, by the time oil leaders will gather in Vienna on the 25th of May, the stockpiles might still be high. This suggestion comes from the International Energy Agency (IEA). The initial surge in OPEC output that happened right before the deal came into force, has not been eliminated yet.

The OPEC has made a mistake by letting countries boost the production after the OPEC oil cut deal was finalized. The countries could freely produce oil until the official start of the deal, 1st of January, according to the Citigroup Inc. Moreover, Commerzbank AG believes that the while the bloc has fully implemented the oil cuts, they are being offset by the US shale output. Eugen Weinberg, the head of commodities research at Commerzbank in Frankfurt, has stated:

“OPEC is like a magician waving his hands and trying to pull the rabbit out the hat, but still the rabbit isn’t there. They’ve done all they can with the production cuts and the effect is close to non-existent.”

The oil cut deal was designed in order to reach OPEC deal Crude oil prices goals by cutting the surplus of nearly 300 million barrels over the 5-year average. However, according to this measure, the OPEC oil cut deal was not successful.

According to the IEA, Organization for Economic Cooperation and Development (OECD) oil stockpiles in the end of December 2016 accounted for 2.98 billion barrels. In January, this figure stood at 3.06 billion barrels. The head of commodities research at Citigroup, Ed Morse, has stated:

“Producers unintentionally accelerated activities that would ultimately obstruct. And for a period reverse, the very rebalancing they were trying to accelerate.”

Oil inventories in the OECD have dropped slightly in February. Yet, they remained 330 million barrels above the 5-year average and bigger than the surplus in December. Market analysts believe that by the end date of the OPEC oil deal, in June, oil stockpiles will somewhat the same as they were in the end of December. This implies staying 200 million barrels above the 5-year average.

However, the situation might change in the upcoming weeks, according to Paul Horsnell. The head of commodities research at Standard Chartered Plc believes that the data for the Q1 is not sufficient to make concrete assumptions. Mr. Horsnell states that the oil stocks might be declining faster than expected. For instance, some major oil producers, such as India and China, do not publish monthly oil stockpile level reports.

Moreover, in case the current Q1 data is correct, a number of analysts still do not claim that OPEC oil cut deal is a failure. In fact, they believe that OPEC members and Russia might extend the deal period for 6 more months.

The Energy Minister of Saudi Arabia Khalid al-Falih stated that there is “an initial agreement” between oil producers that they might need to prolong the deal.

Oil has been rising on Friday, yet it is still set for the biggest weekly drop in a month. Such drastic shift in oil prices is closely associated with the doubts over the effectiveness of OPEC oil deal. Traders are uncertain whether the OPEC production cut will rebalance the oil market. Moreover, traders believe that OPEC deal Crude oil prices might not reach initial OPEC plan’s goals. 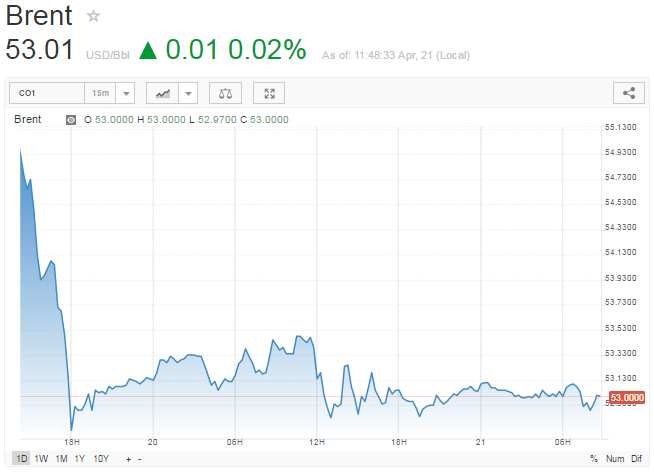 Brent crude futures were trading at $53.07 per barrel at 0642 GMT, 8 cents higher from their last close. Yet, the Brent crude price is on course for 5 percent weekly drop. The US West Texas Intermediate (WTI) crude futures were changing hands at $50.82 a barrel, up 11 cents. However, the weekly WTI price loss is accounting for 4.5 percent.