Iraq OPEC oil cut deal comments drive the oil prices up 2 percent. Meanwhile, the members of the oil bloc are holding the meeting in Vienna. What to expect from today’s gathering?

30 November, AtoZForex – Oil prices surged as much as 2 percent on Wednesday, as the delegate from Iraq has been signaling positivity in regards to the oil cut deal by the Organization of the Petroleum Exporting Countries (OPEC).

Following the optimistic remarks by Iraqi delegate, oil prices soared 2 percent. International Brent crude was changing hands at $47.18 per barrel at 0707 GMT, up 80 cents. The US West Texas Intermediate (WTI) crude rose 1.57 percent, to $45.94 a barrel. In the previous session, oil prices have dropped almost 4 percent over the disagreements between Iran, Iraq and Saudi Arabia in regards to the oil cut agreement. 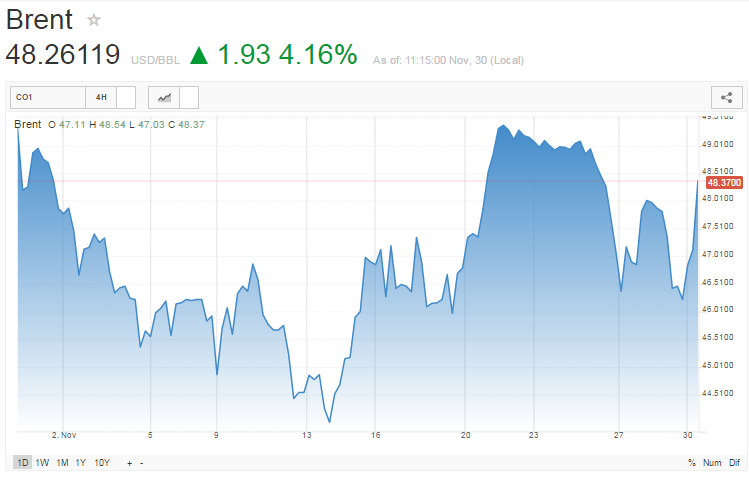 OPEC members are currently holding the meeting in Vienna. The meeting’s agenda comprises the discussion of the details in regards to the oil cut deal, designed in September. A delegate from Iraq has stated that some form of agreement will be reached. Moreover, Iran’s oil minister has been also positive about the meeting. Iraq and Iran are still resisting pressure from Saudi Arabia to cut the production.

Traders believe markets were anxious ahead of the meeting. Additionally, they anticipate the oil prices to sharply swing depending on the result of today’s meeting.

Most experts believe oil cartel will reach some form of agreement today. Australia and New Zealand Banking Group has stated:

“We expect OPEC will reach an agreement … We believe OPEC’s resolve in reaching an agreement remains strong.”

The analysts from Goldman Sachs, ANZ, and Barclays agree that in case OPEC will conclude the deal, the oil prices would rise above $50 per barrel. In case the meeting will not bring any substantial result, the oil prices are set to fall below $40.

Moreover, analysts see an alternative to the oil cut deal by OPEC. They believe that the oil bloc could return to some form of output quota instead of cut in the production levels.