United States president, Barack Obama bans offshore oil drilling and exploration in the US-owned part of the Atlantic and Arctic waters ‘permanently’. What effect will this decision have on Oil prices? Will Oil prices rise?

22 December, AtoZForex – In a time when there was a huge need to cut Oil production for better prices, Barak Obama has decided that Oil drilling and exploration in the “vast majority” of the oil-rich US-owned northern waters be banned indefinitely. This came less than a month after OPEC and Non-Opec Oil producers had an agreement to cut Oil production. In November, after the OPEC agreement, Oil rallied above $52 to make a new 2016 high. Obama has a very good environmental records and this singular act solidifies his environmental legacy. Will Oil prices rise after Obama bans offshore Oil drilling?

Similar measures was also committed by Canada in its own Arctic waters to consolidate the announcement in Washington. The decision according to the white house was for “a strong, sustainable and viable Arctic economy and ecosystem.”. The white house continued that the mutual decision by the two countries:

reflect the scientific assessment that, even with the high safety standards that both our countries have put in place, the risks of an oil spill in this region are significant and our ability to clean up from a spill in the region’s harsh conditions is limited.

Unlike Canada, whose decision will be reviewed every five years, Obama’s decision is permanent . This move was reliant on a 63-years old law which will prevent future leasing of certain offshore areas for oil rights. What effect will this mutual decisions between US and Canada have on Oil prices?

In our last update, we expected oil prices to rise . The Crude oil price was expected to rally to $60. We used the chart below. 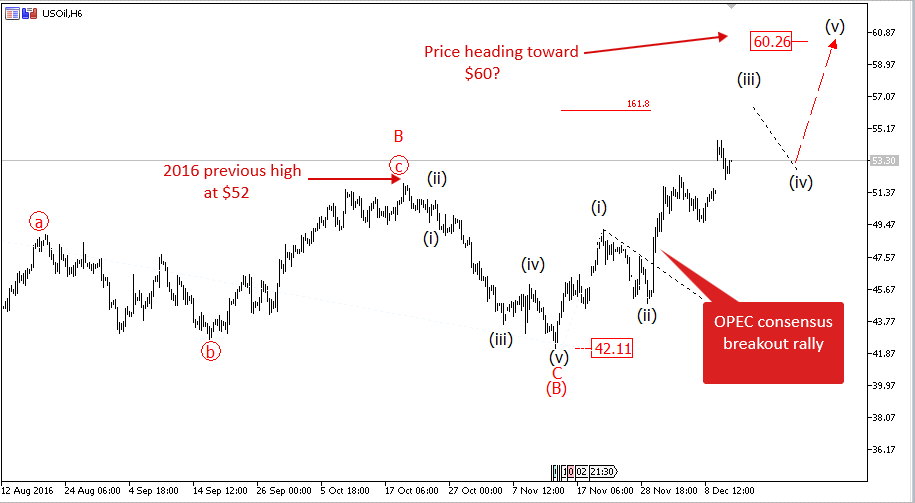 The immediate trend in this case is bullish and price will continue this way unless something sudden occurs. A price move to or above $60 in January or February 2017 is expected. An intraday dip (wave (iv) ) may happen at some point to $52-$54, but it seems price’s response to OPEC meeting in Vienna is not ready to wane anytime soon.

Market price direction is driven by the reactions of participants to important events. The event in this case is bullish and we maintain our stance on advance oil prices.

Though, Obama and its Canadian counterpart’s decisions had an immediate bearish impact on Oil prices, we expect a wild rally to start soon. 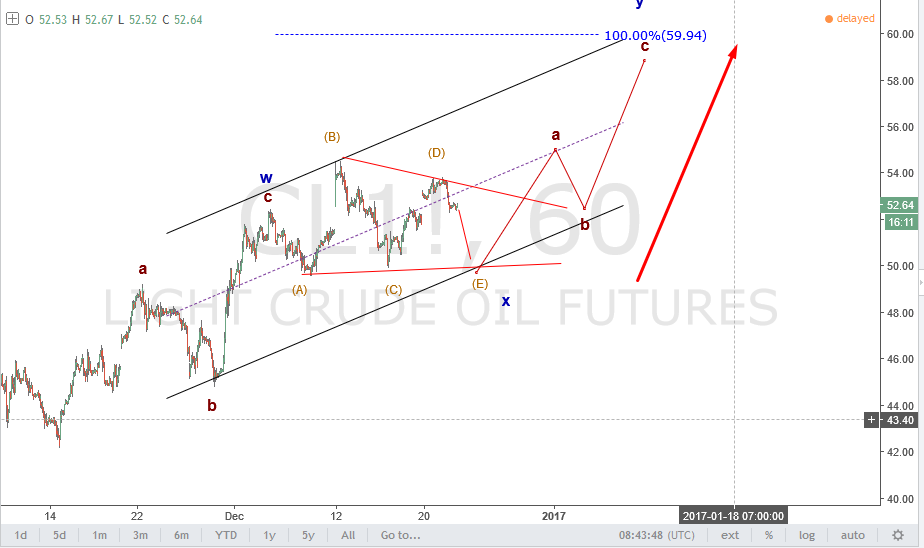 The chart above shows that price pattern looks corrective. A double Zigzag pattern is projected to near $60. Price may continue the dip to $50 before the expected rally. Alternatively, price may rally from the present price.

One thing is clear: Crude oil price has good technical reason to rally further to $60 in January-February 2017. With OPEC production cut decision to be implemented and the latest development in the US and Canada to stop Oil drilling in the Arctic and Atlantic oceans Oil fields, the bullish technical stand is being strengthened further. Oil prices are expected to rally to $60 and perhaps higher.

Open Account Review
Everyone is reading
Daily Forex Option Expiries
Ripple Price Rallies to Highest Since 2018 — Here is Why?
Why is Gold Not Surging?