07 June, AtoZForex - Yesterday we reported about IronFX FXDD Merger rumors which has been enlightened further today. There is actually a bigger picture behind, something like Playtech's FX and CFD market vision but with a company called Nukkleus.

Nukkleus is the company behind the market shake today as they are preparing to become a multi-brand holding firm covering technology, execution as well as broker business all together. According to SEC's 8K filing Emil Assentato (Managing Director of Tradition Service Holding and Member of the Executive Board of Compagnie Financiere Tradition) is the person behind the big story. He controls 80% of Currency Mountain Holdings shares which in return controls 80% of Nukkleus shares. Meanwhile Nukkleus is the company making the big name out there as they have just became the rightful controller of Forexware as well as IronFX Australia.

Since the 8K filing of the Securities and Exchange Commission covers multiple companies and individuals, let's first simplify it in a simple hierarchy chart. 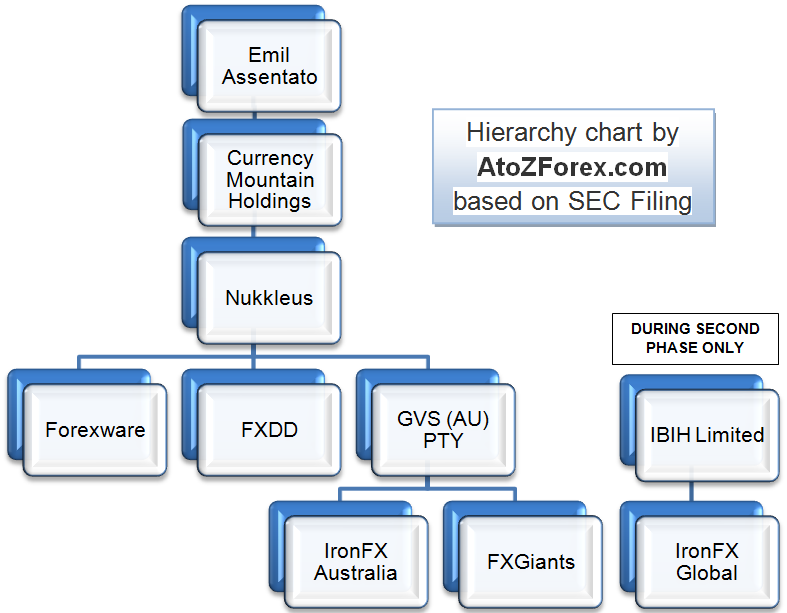 Looking into the Emil Assentato company hierarchy chart above we can see that the very first thing Nukkleus has done was acquiring GVS (AU) PTY which was previously known as IronFX Australia and operated under IronFX.com.au. AtoZForex team reported earlier this year that the IronFX Australia has changed its name as well as its public image and re-branded as FXGiants.

Looking into Nukkleus IronFX acquisition details, we can see that the company has also obtained a 9.9% shareholder stake in IBIH Limited (“IBIH”) the parent company of the IronFX Global Group (“IronFX”), quantified with the purchase of 2,200 shares. According to the company update, Nukkleus has entered into a Stock Purchase Agreement pursuant to which it has agreed to acquire additional equity in IBIH and, prior to such closing, Nukkleus is required to enter into an option to acquire additional Forexware and FXDD Inc (“FXDD”) operating units. These transactions are subject to regulatory approval where applicable.

Meanwhile GVS AU PTY ownership change has to be submitted to ASIC as the firm is regulated by ASIC and must then be approved as well.

Will they merge FXDD and IronFX?

Based on the information gathered by AtoZForex from IronFX Global team on Nukkleus IronFX acquisition details, Nukkleus management will not be merging the newly acuired firms, instead they will maintain the separate brand identity, operational autonomy, and segregated customer deposits for each individual retail Forex brand it may potentially acquire in the future; while simultaneously capitalizing on efficiencies afforded by scale, shared backbones and optimized regulatory capital structure.

As the following step, Nukkleus is required to enter an option agreement with FXDD Malta Ltd and FXDD Trading Ltd as an indication that that company may fully acquire both entities. However, to do so Nukkleus is likely to issue additional shares, even then the deal would be subject to the regulatory approvals.

Once the FXDD acquisition is completed, Nukkleus would be acquiring the remaining 20.000 outstanding shares of IBIG as the second phase. The 2nd phase must be completed by the 28th of November 2016. May the FXDD acquisition fail IBIH must return the initally paid $1 MLN back to Nukkleus and assign the give 24,156,000 shares back as well. On the other hand Nukkleus would be returning all the equity held in GVS AU PTY back to IBIH.

If you are wondering who will be Nukkleus Board members, here is your answer. Once the phase 2 is completed Nukleus Board will be made of 6 members mix of all the companies involved: