NSA has been reportedly working on quantum-based cryptography technology which might pose a threat to the future of cryptocurrency and Blockchain.

September 05, 2019, | AtoZ Markets – The United States National Security Agency is developing a quantum-resistant cryptocurrency. The NSA is doing this to battle cyber threats from other countries. North Korea, China, Russia, and Iran are the main threat.

A quantum-resistant cryptocurrency is needed to remove the threat of cyber warfare. Theoretically, a network of quantum computers can take over an existing blockchain, like bitcoin. As a result, this type of cyber warfare is a threat to the future of digital currencies.

The current hashrate of the bitcoin network is near 90 quintillion hashes per second. To take over the network a hacker needs 51% of the total hashing power on his control. However, quantum computers are more efficient in solving problems and calculations. That means that even a basic type of quantum computer would be able to solve hashes faster than any other normal computer. 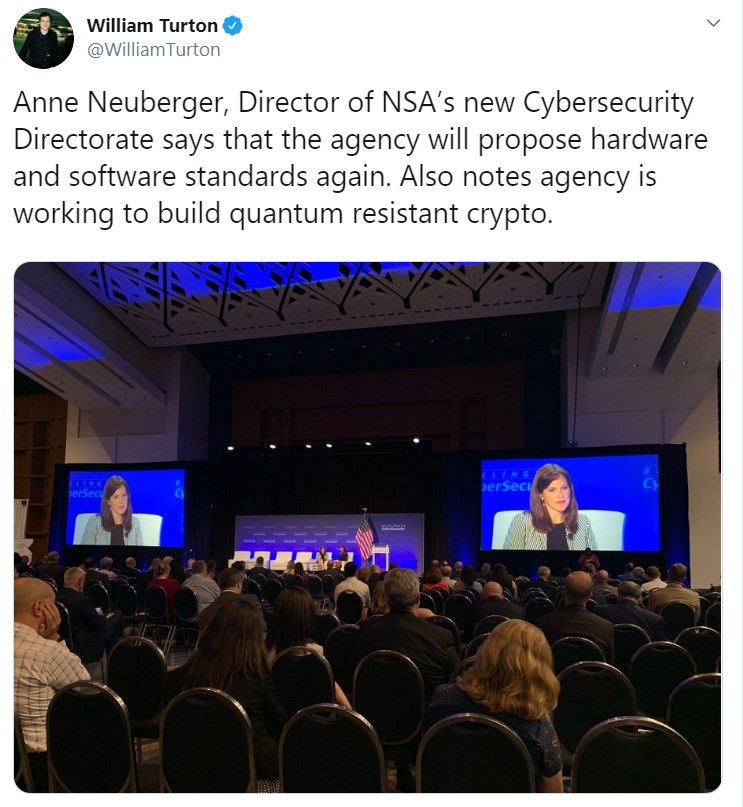 Although the exact reasons for why the NSA might be launching its own digital currency are not clear. Moreover, several analysts have argued that in the future quantum computing could pose a threat to existing crypto and blockchain-based platforms.

Quantum computing technology might advance to the point where it would be able to crack existing cryptographic systems that are used to secure data, including the private keys to users’ cryptocurrency holdings.

NSA might be working on Crypto Technology, not a cryptocurrency

Neuberger’s recent statements could also mean that the NSA might be focusing its research on developing quantum-resistant crypto technology and not necessarily a cryptocurrency.

The NSA’s new Cybersecurity Directorate was established in July. Its mission is to prevent threats to National Security Systems and the Defence Industrial Base. The Directorate will begin its operations on October 1, 2019.

Neuberger was in charge of NSA’s Russia Small Group before she joined the cybersecurity unit.

The NSA has also ordered Bitcoin surveillance activities which were reportedly shared by Edward Snowden, an American whistleblower who has previously leaked highly classified information from the NSA. According to that, the agency has been collecting private information including Bitcoin account passwords, device identifiers, and users’ internet activity.