Get VIP Trading Signals Market Watch
Trade Now Your capital is at risk.
The global crypto exchange Binance has launched a Notre Dame crypto donation program to support its reconstruction.

18 April, 2019, | AtoZ Markets - The major global crypto exchange Finance has initiated Notre Dame crypto donation, by making a post on Twitter on 16 April. The company’s donation program, “Rebuild Notre-Dame,” addressed the crypto community to support the Binance campaign to restore the Parisian cathedral that suffered “colossal damages. “In their post, the company stated that the recent event was a “great moment of loss for culture, arts, and history. All humankind shared that.” 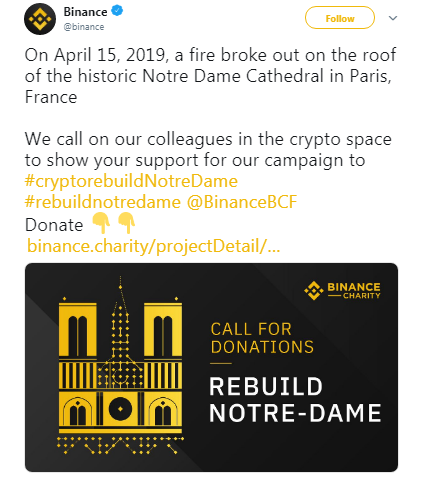 The company’s social project Blockchain Charity Foundation (BCF) launched the new donation channel on the Binance charity platform initiated. By the time of publication, the Notre Dame crypto donation campaign has amassed 28 donations. Donations were in bitcoin (BTC), Ethereum (ETH), and Binance’s internal token Binance coin (BNB). That was accounting to 1.46 bitcoin, which is worth about $7,577 at press time.

The Tragedy of Notre Dame in a Brief

The Paris officials believe that fire was an accident and deny any suspicions of terrorism or arson. However, the local paper reports that a major fire erupted at the cathedral on Monday. Flames may have started at the bottom of the cathedral's giant spire. And it may have caused by a glimpse due to one of the elevator’s malfunctions.

The media noted that a fire alarm was triggered at 6:20 p.m., but no fire was discovered. Then, at 6:43 p.m., another alarm sounded. The same day, as the local papers report, at 16:50 GMT, the fire broke out in the attic of the cathedral. About 500 fighters battled the blaze. One firefighter was seriously injured. By the early hours of Tuesday, at 10:00 local time (08:00 GMT), the fire was extinguished.

The Costs of Damages are Huge

The destroyed roof, with its 800-year-old wooden beams, was one of the oldest such structures in Paris. It was for commenting on the damages, the local officials said.

It remains unclear how much Notre Dame restoration might cost. The Windsor Castle reconstruction work. It was also after a fire incident in 1992. That cost 37 million pounds ($48 million), according to the Royal Collection Trust. Restoration of Notre Dame has already started before the fire, with a budget of about 150 million euros. Michel Picaud, of the fund-raising group the Friends of Notre-Dame de Paris, said that in an interview with the local media. However, that may need to be tripled after the fire.

The Donations have Reached Millions in a Glimpse of a Minute

In response to French President Emmanuel Macron’s appeal for a fundraising campaign, huge oil, cosmetic, and luxury conglomerates from France. Also, the USA began to donate for the reconstruction of the cathedral. By the moment, companies like L’Oreal SA, LVMH, Total SA, Bouygues SA, Capgemini SE, and others have expressed their support. By now, the Notre Dame cathedral reconstruction fund has reached over 700 million $.

Sotheby's, one of the world's largest brokers of fine and decorative art, jewelry, real estate, and collectibles, auctioned 25 boxes of five bottles. That was from one of the most prestigious global wine producers, Chateau Mouton Rothschild. Also, he collected almost a million dollars on Wednesday morning restoration of Notre Dame.

The two owners of the Paris bookstores called on publishers of the cult book Victor Hugo “Brokeback from Notre Dame.” That was to join the financial campaign. They were Amandine Arden and Antoine Bonnet.