Following Tuesday Brexit defeat for UK PM Theresa May, GBPUSD is recovering back to 1.1315. More volatility is expected today as the market awaits the outcome of the ‘no-deal’ Brexit votes.

13 March 2019 | AtoZ Markets – UK’s members of parliaments rejected Prime Minister May’s new deal with the EU after yesterday’s 242-391 votes in favor of the ‘Nos’. PM May had earlier stated that she secured a ‘legally binding’ Brexit changes after Monday’s meeting with the EU’s Juncker. GBPUSD quickly gained 2.5% to hit 1.329 as the market expected a 50-100 Tuesday’s vote margin. The pair dropped massively shortly afterwards after UK Attorney general stated that the risks attached to the ‘backdrop’ changes persist.

What comes after ‘no-deal’ vote?

The consequence of the ‘no-deal’ vote is that Brexit will be delayed and extended beyond the 29th March deadline. However, there is no clarity as to the duration of the extension and it’s also uncertain whether the EU will accept this new development. This uncertainty will pose more downside risks on the Cable which has maintained a 4-5% gain so far since the turn of the year. The market will focus on the ‘no-deal’ votes on Wednesday and Thursday. If the ‘no deal’ option is rejected by the MPs today, another vote will be held on Thursday to decide whether to extend the negotiation period beyond 29th March deadline. In addition, the EU will also meet next week and decide whether to give the UK more time beyond the deadline date to strike a deal.

Traders should expect more price spikes across the GBP pairs as headlines roll in today and Thursday. Even if the ‘no-deal’ is rejected today and an extension is agreed on Thursday, there will still be concerns as to the length of the extension and whether an acceptable deal will be struck with the EU, eventually. In this political war, the Cable will not lack volatility. 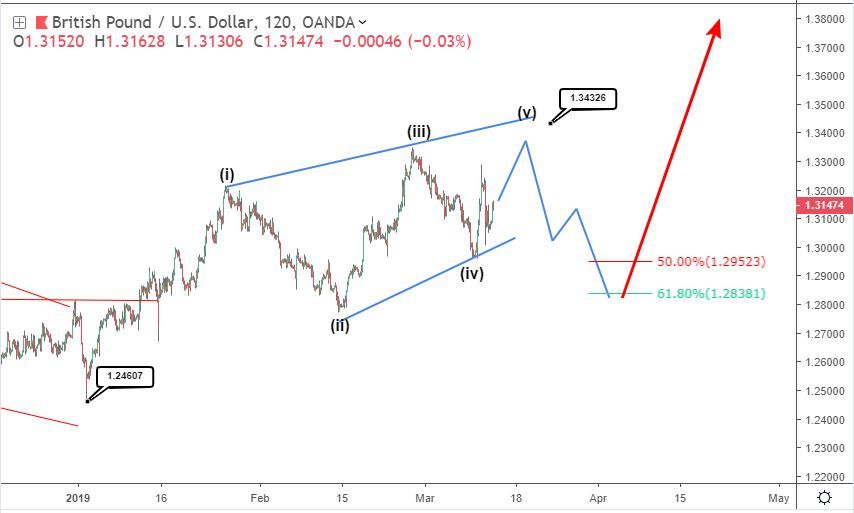 Whatever political or economic events that drive the market, they are very well represented on the price chart with patterns that are repetitive. Since the turn of the year, the Cable has rallied and slumped but has shown a prevailing bullish trend. A leading diagonal is currently developing from 1.246. The 5th wave is expected to break above 1.335 February high to hit 1.342x-1.343x before slumping below 1.3 again and then resume upside toward 1.4. It seems a much larger bullish trend or a large bullish correction is developing.

Tags Brexit Elliott wave analysis GBPUSD analysis
Forex Crypto
Top 5 Forex Brokers
Top 5 Crypto Exchanges
Your subscription could not be saved. Please try again.
Thank you for subscribing. You will be the first to receive all the latest news, updates, and exclusive advice from the AtoZ Markets experts.
Everyone is reading
Top 5 Forex MT5 Indicators for 2021 you should try
Top 5 Cryptos to Watch in Quarter 2 2021
Bitcoin Facing Resistance Around $60,000 Event Area - What Next?
close ×