BoE Super Thursday brings us the following news: No change of BoE interest rates and the increase of the growth outlook for this year and 2017. What have influenced the data?

3 November, AtoZForex - Bank of England (BoE) Super Thursday is here - the major significant event that was highly expected by the financial markets. Let's look back at what Major banks have expected and follow it with the details of actual data.

Barclays has expected no major changes in BoE policy settings, where the bank saw  Vlieghe and Haldane voting positively for the rate cut. In addition, the Bank states that the expected depreciation in Pound could appear relatively small.

The Royal Bank of Scotland (RBS) believed that no rate cut would take place this time. Even though the Bank stated that it sees the MPC’s CPI forecasts to be pushed higher at the 2-3 year outlook range, it still anticipates a 15bp rate cut and a £60bn QE stimulus in February 2017.

BofA Merrill Lynch has indicated its positive stance in regards to BoE data, as it believed in the advance in growth and inflation outlook in the QIR to support the near-term Pound firming. Moreover, Merrill Lynch stated that the GBP could rally on the expectations of GBPUSD lows in Q1 2017. Yet, the bank stressed that it does not think that the data will act as the main reason for GBP consolidation.

Credit Agricole has highlighted that they expect Mark Carney to use the IR conference to “talk up” the GBP. Moreover, he was expected to point out the fact that the opportunity for any future easing will depend on the future pattern of the currency.

Bank further stated that this point could provide the support for Sterling in case it will be perceived as the potential reason for the delay of the future BoE easing.

What do the actual BoE Super Thursday figures say?

The central bank has decided on no change of BoE interest rates, where the bank's Monetary Policy Committee (MPC) has set monetary policy to meet its 2% inflation target, therefore supporting the growth and employment levels across the country. See how the BoE has hiked its inflation forecast in the chart below: 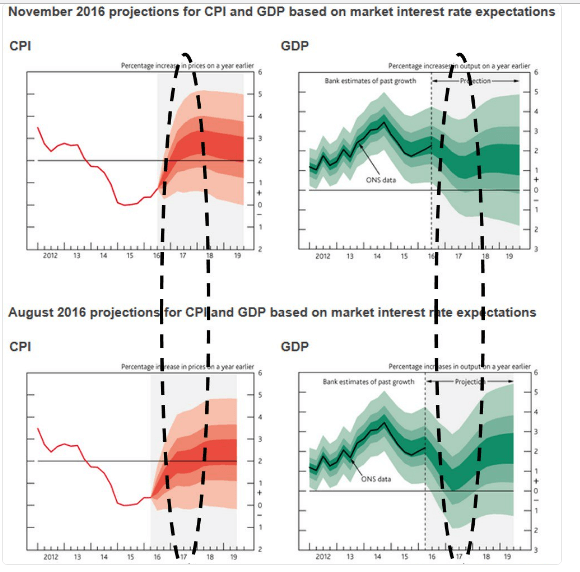 Moreover, the Committee has unanimously voted to keep its £10 billion Pound non-financial investment-grade corporate bond buying programme, which is financed by the issuance of central bank reserves. In addition, the MPC has voted to continue its £435 billion UK government bond buying programme.

Furthermore, the bank states that the UK economy has outperformed its expectations in the period, following the cut it rates. As for the inflation matters, BoE expects the levels of inflation to reach 2.7% in a years time, where the CPI is anticipated to hit 2.83% in the Q2 2018.