Google searches for “Bitcoin” term are going through the roof in Africa wIth countries, such as Nigeria being reported to be the highest search rates.

September 26, 2019, | AtoZ Markets – While cryptocurrencies continue to depreciate, the Binance research team has compared the results of search queries for Bitcoin. The researchers presented the results of the work in a recent tweet.

Bitcoin Google searches growing in Africa and the Middle East

According to Binance Research, the Google search trends of “Bitcoin” term have moved from Western countries to Asia and Eastern Europe throughout the years and recently landed in Africa. Today, Binance Research presented a short video which shows the changes in heat ranking of Bitcoin term in Google search by country. The visualization starts with January 2011 and ends on September 2019. 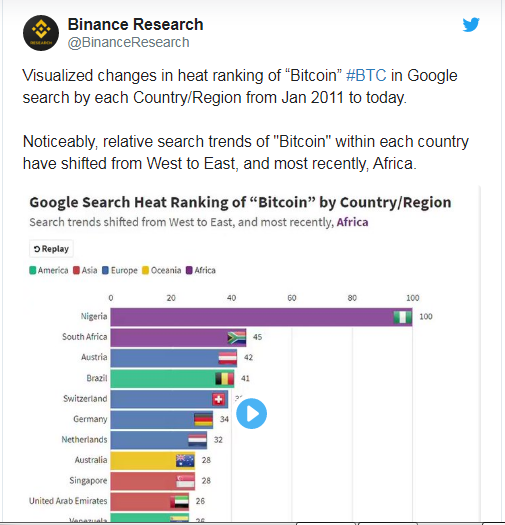 Interestingly, in the first analyzed year, Bitcoin was quite popular in North European countries, including Ireland, Finland, Sweden, Estonia, Denmark, Norway, and Iceland, among others. Russia and New Zealand were also at the top.

In 2012-2013, the Northern countries like Estonia and Iceland were joined by Australia, Canada, Austria, Hong Kong, and Israel, among others. During all these years, countries like the US, Germany, and the UK appeared in the middle of the top 10 here and there.

Starting from 2014, Singapore and Hong Kong consolidated their presence in the upper echelons.

In 2015, Greece led the ranking for a few months while the Philippines and Venezuela joined the top 10. The popularity of Bitcoin at the time coincided with the political crisis in Greece, which was struggling with a debt crisis and was even about to exit the European Union. Venezuela joined the top after the parliamentary election in 2015, which ended up with the political crisis in 2016.

Bitcoin search most popular in Nigeria

Starting in 2017, African countries like Nigeria and South Africa has led the ranking. In fact, during the last two years, the two countries have continued to occupy the first two positions of the ranking.

The stats below show the current distribution of Bitcoin searches by region:

Nigeria is topping the list arguably due to the size of its population (about 190 million), indicating that the majority of the population in the country are aware of the flagship cryptocurrency. What is more, it may be connected to the fact that the west African country is subject to high inflation rates and shady political practices and citizens are turning to cryptocurrencies as a preferred option to secure their wealth or pay for international transactions.

What is China position?

You may be wondering where Asian countries like China, Japan, and South Korea are. Prior to the Bitcoin ban, China accounted for about 90% of Bitcoin trading volume, so it is natural that it should have accounted for most of the searches as well.

However, the Chinese do not use Google for their searches, instead, they rely on Baidu, which is currently the second most visited site after Tmall.com, according to Alexa. Google is not even in the top 15.