Gold bearish trend continued despite a perceived weakness. Price is some pips shy of our final bearish target at 1155. NFP seems to be the next trigger for the near term Gold price movement. The NFP Gold technical analysis is expressed below from Elliott wave perspective. What should you expect after the NFP data today?

Our bearish targets were set at 1180 and 1155. 1180 was taken out and we added 1170 as an alternative target in the next update. Price got to 1170 and in a later update on the Gold Elliott wave analysis, we discussed about the weakness of the bearish trend from 1170 if price broke above 1190. With a break above 1190, the bullish trend was expected to return. We had an alternative expectation of a continued bearish move to 1155. There were lines of distinction drawn to show the level of validation and invalidation of each of the scenarios.

Price broke out of 1190 and started what was in-between the bearish continuation and bullish resurgence. We then gave a warning update for the condition necessary to hold on to the bullish sentiment or the bearish sentiment. 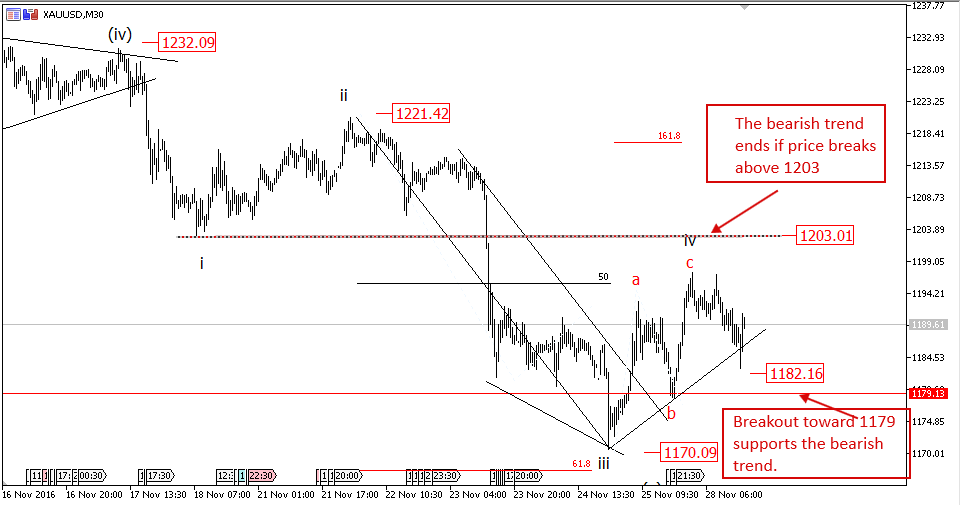 Price will probably continue the bearish trend if 1179 can’t support price anymore. A break below 1182 is an early sign of this. If a solid breakdown happens, the next returning level will be 1155- our bearish final target.

Price broke below 1182.16 which was enough conviction to suspect the bearish trend was not over yet. Price dipped further and was just some pips shy of the 1155 final bearish target.

The chart below shows our updated Elliott wave analysis of the bearish Gold trend and the possible effect of the NFP data today. 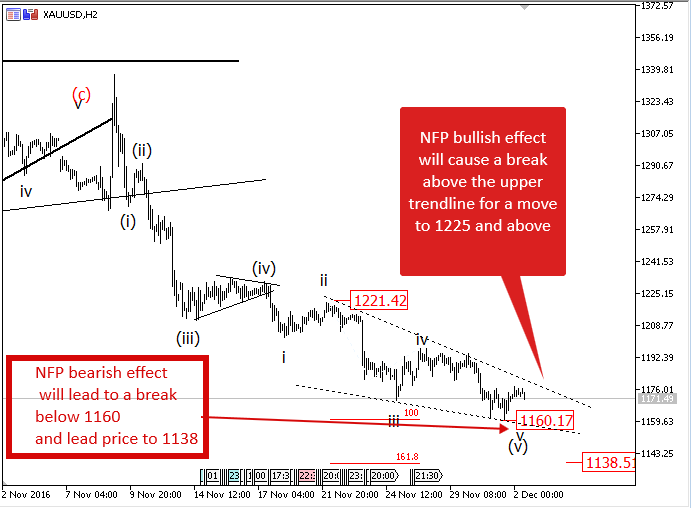 A better than 177K NFP data will cause Gold to decline toward 1138 while a worse than 177K release will cause Gold to rally above 1190 and to 1225. The NFP data today will cause a price deflection especially if the deviation between the released data and the expected data is +50k and above for the decline or -50K and below for the rally in Gold.

We will continue our Gold Elliott wave analysis updates after the NFP data.

Don’t forget to share this Gold Elliott wave intraday analysis with people that matter to you.