May 16, 2019, | AtoZ Markets – A web intelligence platform Indexica has recently revealed 3 reasons why bitcoin grows. The report published on Bloomberg showed what stands behind the bitcoin’s 28% run-up throughout the month of April.

The professional discourse around Bitcoin fuels its price

According to the report that Bloomberg cited, the main engine of the bitcoin’s value rapid growth is the conversations surrounding the leading cryptocurrency.

In addition, Indexica research, based on natural language processing of thousands of textual documents revealed that more traditional institutions and certain global brands are taking it more seriously. Indexica team made such assumptions based on the quality of Bitcoin discourse.

The complexity of the discussions surrounding the crypto suggests that more academics and financial professionals are deliberating about bitcoin. It seems like in the last months the most famous crypto has managed to gain more trust from the community. 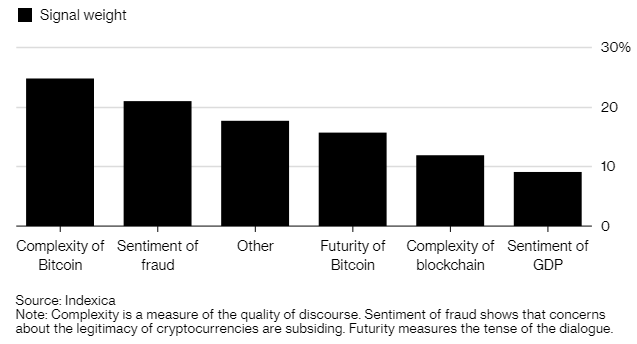 Three major drivers of the coin’s growth according to the web intelligence platform analysis covered the following crypto-related aspects :

Indexica’s study also revealed that the tense of the conversation changed. The community showed a tendency to speak about bitcoin future. While speaking about the future issue of bitcoin, Zak Selbert, chief executive officer at Indexica, noted: “Think about it, executives will speak of good things they expect to happen on conference calls before they happen. They only mention mistakes afterward.”

According to the latest Atoz Markets research since the April bullish breakout, the crypto market has experienced a huge optimism that has continued to drive prices higher. Since the Bitcoin price broke above the year’s previous high of 4300 on 2nd April, it has gained over 80% to hit $8,300. Bitcoin is back to the sort of rallies that were observed in the 2017 bullish days when it hit $19,800 all-time high. In 2020, the recovery is expected to continue with wave (3) leading a rally toward $19,800 high and even breaking above it to reach a new all-time high.

Looking at yesterday’s chart, the Bitcoin price broke above the $8,000 resistance level with bullish momentum. The buyers even pushed the price above $8100 and $8300 resistance levels, however, there was a lot of selling pressure around $8,350 resistance level and thus after reaching up to $8,340 mark, bitcoin price started to correct downwards. During the downward correction, BTC declined below $8,200 and $8,000 support levels.

The chart shows that BTCUSD is currently trading above $8,000 and trying to move towards $8,100 level. Most probably, BTC might fall towards the $7,600 support level again before a fresh upward move. If BTC remains above $7,600 support level, it will stay in an uptrend and might soon test $8,350 and $8,500 targets.