February 22, 2019, | AtoZ Markets - MyEtherWallet, a popular ethereum wallet has announced added some new features to improve the quality of life of users, after completely reworking its product and its website. The new version of the MyEtherWallet (MEW) entitled as Version 5 will have a new implementation of a new crypto-to-fiat withdrawal system. The popularity of MEW, also attracted fraudsters, as there have been reports of fake MEW wallets in 2017 and 2018.

MyEtherWallet lets to store Ethereum and ERC20 tokens. The platform is a fully open source that enables the user to use dapps (decentralized applications) and to deploy smart contracts directly from the platform. The company has a partnership with hardware wallets like Trezor and Ledger Nano in order to be compatible with these hardware wallets and to offer more security for the users.

The New MEW Versions and Features in Brief

The new MyEtherWallet integration with Bity, a crypto finance platform, will allow MEW V5 users to exchange crypto to fiat (Euros or Swiss Francs) without KYC (know-your-customer) verification, up to CHF 5000 (which is equal to USD 5000). The MEW representatives claim that “bitcoin and ethereum for the first time can be exchanged seamlessly with Euros or Swiss Francs, right inside the wallet.” Both companies already announced their collaboration results on Twitter. 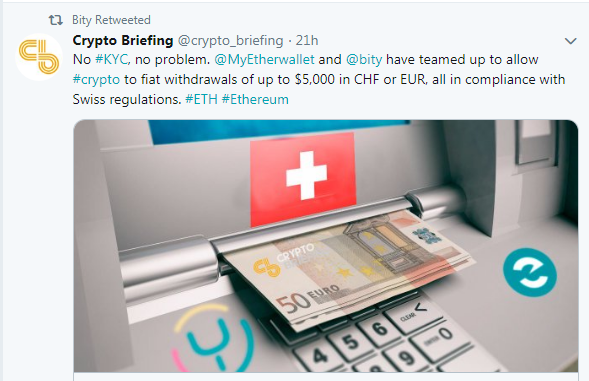 Along with crypto-to-fiat withdrawal feature implementation, another improvement relates to the MEW users protection. Because of the several sites that tried to copy MyEtherWallet in order to scam the users. Now, MEW users are being educated to use the hardware wallets, other than accessing their money via riskier methods. As the CEO of the company, Kosala Hemachandra shared the focus of the company, since its launch. Which has been on educating the users about wallet safety, so they could keep their funds protected. 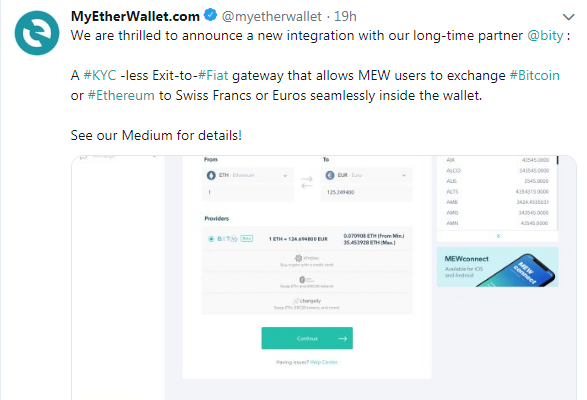 Another new feature is the SendSafe security option, which will use smart contracts in order to reroute outgoing funds. In order to prevent fraud and to prevent the user from sending money by accident.

Bity Crypto to Fiat Cashouts Implementation Will Not Require KYC

According the company's official website, Bity is fully regulated in Switzerland, it is platform that allows investors and traders to buy, sell or trade cryptocurrencies. The company was launched in 2014 and now operates a network of crypto ATMs across five cities in Switzerland.

Bity is compliant with the Swiss Anti Money Laundering Ordinance (AMLA), which enables it to offer KYC-less Exit-to-Fiat gateway. While using the new Bity Exit-to-Fiat implementation, the MEW V5 users will be asked to provide their phone number and later verify the number by providing the verification code they will receive via text message.

After the verification is complete, users will be asked for banking details. Lastly, the client will be asked for the official name on his/her bank account and the billing address. MEW will never store any of this information, but Bity must request this data for compliance purposes.

What do you think? Has MEW set a new industry standard? Let us know in the comments section below.