Moneybookers, Neteller, and Skrill cards across Brazil will be cancelled, as it is reported by the local media in Brazil. What are the consequences for Forex traders in LATAM region?

18 November, AtoZForex – The Neteller, Skrill and Moneybookers’ cards for Brazil will be reportedly blocked for the Brazilian users. Following the increase in the transfer rates between accounts and in the rates for withdrawals, the cancellation of the cards was not a surprise for markets.

Neteller and Skrill cards across Brazil will be cancelled

According to media reports from Brazil, Neteller and Skrill have sent the following messages to their clients: 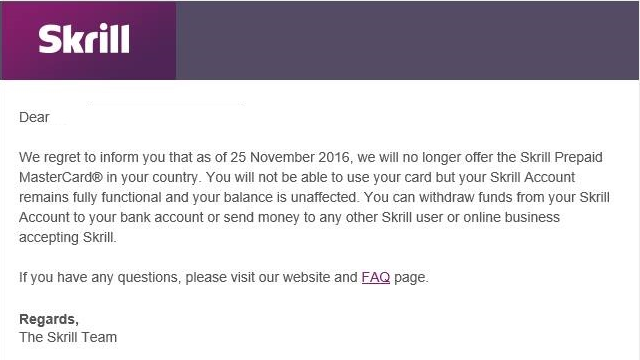 Moreover, Brazilian media states that from the 25th of November, Neteller and Skrill will block and disqualify the cards cross the country. Also, the representative of Neteller has indicated that such decision is applicable for the whole LATAM region. Reportedly, he has stated:

“It has nothing to do with the regulation matter of betting. Even though the clients of Neteller were using the service mainly for these purposes, this decision is not about the regulation or betting issues.”

In addition, the representative stated that the company is doing everything to reverse the decision as soon as possible. Yet, he did not name any specific dates for this.

What now for Neteller and Skrill users?

Now, if Neteller, Skrill, and Moneybookers will block the cards, deposit sizes from Brazilian traders will go even further down.