7 February, Orbex – Stephen Poloz was giving a speech in Edmonton, Alberta. The remarks from the BoC governor reinforced economists’ expectations. Who forecasted that the Bank of Canada could continue to keep interest rates unchanged for the remainder of 2017 and well into 2018.

This is expected to give enough time for the Canadian economy to recovery from the shocks on the back of a commodity-price slump. This is in stark contrast to the US Federal Reserve which is hoping to raise interest rates three times this year.

Speaking at the event, Mr. Poloz said that the oil shock put a dent to the economic recovery in Canada. Which was well on its way to recovery. “That set us back for two, three years,” he said. Leading to the central bank to cut interest rates twice in 2015. While, bringing the key lending rates to 0.5%, a historical low for the BoC. 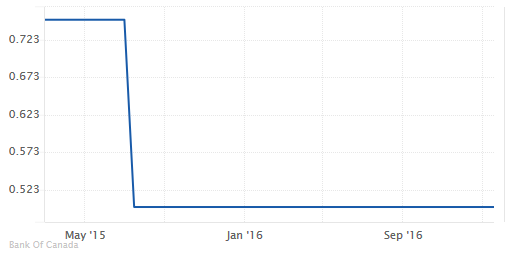 Moreover, the BoC governor made it clear that the Canadian economy was in some ways playing catch up with the US. As a result, the monetary policies will continue to diverge for the foreseeable future. “Do not expect to see Canada following the U.S. at this stage in terms” of rate increases; the BoC governor said at a press conference on Tuesday, January 31st.

Poloz did not rule out further rates down the line, despite the widely held view that Canada’s interest rates would remain steady for the next year. The BoC governor said that if there was a “significant delay in getting the economy back to full capacity and inflation on target,” the central bank won’t hesitate to cut rates. Poloz maintained this dovish view, which was conveyed to the markets during the monetary policy meeting in January this year. Still, the central bank is hopeful that the Canadian economy would post a full recovery by 2018.

The main take away from the speech was that no rate hikes are warranted in the near future. The BoC Governor’s message reinforced the view that further easing is on the table.

The central bank also remained cautious on the trade policies from the US. With the North American Free Trade Agreement (NAFTA) being called a “disaster” for the US by President Trump. “Skittishness over trade policy means economic uncertainty has climbed,” Mr. Poloz told the Edmonton audience.

Speaking on the exchange rate, the BoC Governor expressed concerns that the strength of USD was a major headwind for Canada. Despite most of the currencies weakening against the greenback, the Canadian dollar has remained largely stable. Hence, it puts Canadian exporters in a tight spot. 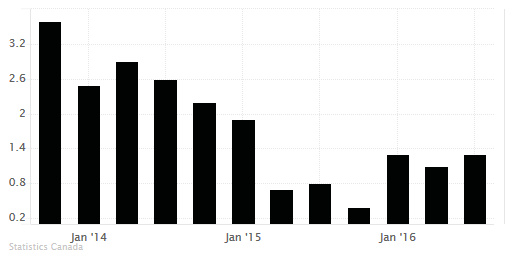 Last week, the monthly GDP report released by Statistics Canada showed that the economy rebounded in the month of November. Rising 0.4% during the month to C$1.69 trillion, the GDP managed to offset the surprise decline from the previous month. Most of the gains came from an increase in manufacturing and resource development. The headline GDP figure was higher than market expectations which forecast a 0.3% increase from the month before. The data reinforced expectations that the fourth quarter GDP growth could come in higher than the estimated 1.4% quarterly growth rate. This could also mean that the BoC will be holding rates steady at the next policy meeting.

On an annual basis, Canada’s GDP was recorded at 1.6% in November with previous month’s GDP figure being revised higher to show a 0.2% decline against the initial estimates of 0.3% contraction in the economy. Following the GDP release, the Canadian dollar strengthened against at the greenback. Briefly moving to its highest level since September 2016 as the US dollar hit C$1.3018.

This article, “Will the Monetary policy divergence remain in 2017” was provided by John Benjamin. An analyst at Orbex – an AtoZ Approved Forex Broker.