Get VIP Trading Signals Market Watch
Trade Now Your capital is at risk.
Microsoft Excel adds Bitcoin symbol as a currency option to its Excel spreadsheet program in its latest update. This was according to rumors which started on Reddit.

May 28, 2019, | AtoZ Markets - Bitcoin investors have now been encouraged by the news coming out of Microsoft yesterday. Microsoft Excel users will now be able to add the Bitcoin symbol to their spreadsheets to help them record financial data. This is another sign as to how high the tech giants are on cryptocurrencies and blockchain. Reddit user “thepowerx,” was the first one to reveal this news. 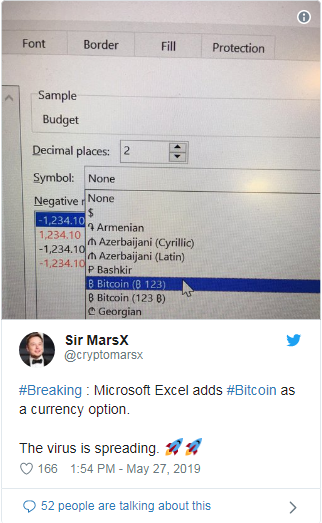 What is more, a Microsoft employee has reportedly posted the image below where it shows Excel providing real-time prices for Bitcoin, Ethereum (ETH), and Ripple (XRP).

However, there are limited details regarding the new Excel currency option as Microsoft is yet to comment on this added feature to its program to reveal if it is coming to the entire Microsoft Office package or clarify whether or not the screenshot is real. However, none of the respondents on Reddit or Twitter suggested that the screenshot had been doctored.

Microsoft is no stranger to the Bitcoin and cryptocurrency community. Back in 2014, it set out an ambitious strategy to jump on the cryptocurrency bandwagon, being among the first to accept Bitcoin payments for its products.

As AtoZMarkets earlier reported, the company recently launched the first decentralized identity solution called ION on top of the Bitcoin blockchain. The open source project works with underlying mechanisms of how networks communicate with each other.

More recently, the tech giant has been notable for its supposed involvement in the launching of the Bakkt platform with the Intercontinental Exchange – the owner of the New York Stock Exchange. Microsoft’s venture capital division – known as M12 – was reportedly one of the much-anticipated platform’s early financial backers. Others include Galaxy Digital, Horizons, Ventures, Fortress Investment Group, and the Boston Consulting Group.

Microsoft has also released a development kit for Ethereum on its Azure cloud service which supports the development of other blockchain platforms and its Azure service is genuinely aiming to make development easier.

Bitcoin is the most secure blockchain

Microsoft choosing to build directly on Bitcoin instead of a quicker blockchain is an indication of its love for digital assets. So far, Bitcoin is the most secure blockchain. Considering that people’s identities are at stake, opting for the chain least prone to attack makes sense. It also proves that Microsoft is betting Bitcoin will out-survive other projects within the present cryptocurrency space.

While Microsoft is just one of the big names in technology to have plans in the cryptocurrency realm, Samsung, for instance, is reported to soon be integrating a cryptocurrency or blockchain solution into its Samsung Pay application and cheaper handhelds in its Galaxy roster. Reports also suggest that the South Korean conglomerate is also looking to launch “Samsung Coin”.