The all-important ECB meeting is scheduled to hold by 12.45 GMT tomorrow where details on the Quantitative easing program are expected to be unleashed. We will keep our minds open for possible surprise announcements, as has been the trend for Central banks lately. 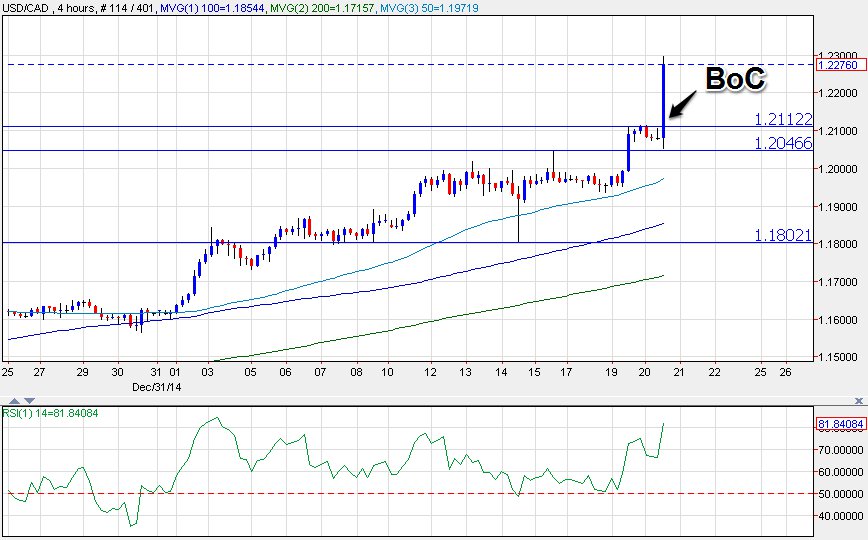 The Bank of Canada surprised the markets yesterday with a cut on its benchmark interest rate as the country struggles to counter the effects of cheaper oil on economic growth and inflation and help guard against the risks of a housing market downturn. The Canadian central bank cut its overnight rate to 0.75 percent from 1 percent, where it had been since September 2010, and it downgraded its inflation and growth forecasts for the coming year. This was unanticipated by the market and consequently sent the CAD tumbling as the USDCAD pair soared to a 5 year high.

Australian Melbourne Institute (MI) Inflation Expectations, a calculation of Percentage that consumers expect the price of goods and services to change during the next 12 months which was 3.4% last month.This will give us reasonable expectations of future inflation as it fell by 0.2 percentage points to 3.2 percent in January.

From the UK, two MPC members are scheduled to speak today; David Miles and Paul Fisher. Miles is scheduled to speak at the University of Edinburgh Business School and Fisher at the Westminster Business Forum Insurance event, in London. Nothing serious is expected from their speech. Public Sector Net Borrowing is forecasted to have dropped from a previous value of 13.4B to 9.2B, signaling a difference in value between spending and income for public corporations, the central government, and local governments during the previous month.

Its day two The World Economic Forum (WEF). Not much is expected in terms of big news from the annual meeting held in Davos and attended by central bankers, prime ministers, finance ministers, trade ministers, and business leaders from over 90 countries. Although we will be listening for interesting comments from central bankers and other influential officials that could create significant market volatility.

From Europe, the Minimum Bid Rate is expected at 12.45 GMT, forecasted to stay at 0.05% as has been since September. The rate decision is often priced in the market so its likely to be overshadowed by the ECB Press Conference scheduled to hold 45 minutes later. The all-important ECB Press Conference will be held at 1.30 pm GMT. Mario Draghi, is expected to announce the launch of the much anticipated “Quantitative easing” program. The major thing to be watched is the pattern through which the Central bank will unwind the spending. Speculation over the QE program has already sent the Euro into an extended weakness.

The US Unemployment Claims which shows the number of individuals who filed for unemployment insurance for the first time during the past week is forecasted for 301k. Although it’s generally viewed as a lagging indicator, the number of unemployed people is an important signal of overall economic health because consumer spending is highly correlated with labor-market condition.