Bitcoin has stayed range-bound between 6250 and 6050 after yesterday bearish onslaught on the Crypto market. What are the next targets based on technical analysis?

The Crypto market was in red yesterday. Prices broke below several support levels nearing or even breaking below the last low. Bitcoin dropped below 6100 in less than two hours. The rapid drop paused and probably looking for the next trigger. Should it recover or drop significantly below the 5700-5800 year support level? Technically, the bulls haven't done much so far to call for a big bullish recovery. According to CoinMarketCap, BTC has in the last 24 hours gained 0.1%, ETH has lost 1.49% and XRP gained 4% at the time of writing this report.

Bitcoin market capitalization, though dropped by about a billion dollar, is still within the $114 Billion average recorded so far this month. Despite yesterday's fast price drop, BTCUSD trade volume increased by more than $1 billion from yesterday's $3.79 billion. There is still increased optimism among investors and traders as the trade volume has increased by 29% from what it was at the beginning of the month. What are the important price levels? 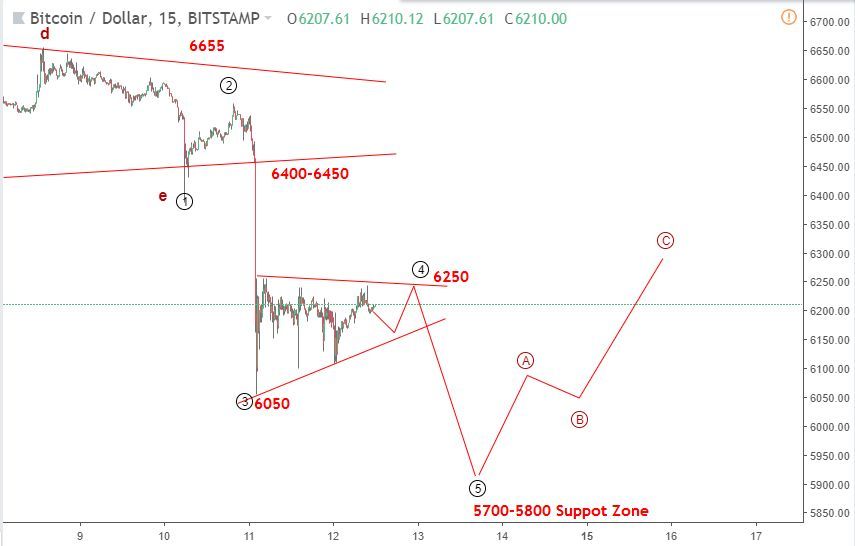 Yesterday, before the huge fall, price completed a triangle pattern. Since the breakout, the bearish pressure has increased its grip on the big Crypto coin. The chart above shows the Elliott wave analysis of the bearish breakout. From 6650, we can sufficiently identify an emerging bearish impulse wave . The breakout happened at 6400-6450 neckline. Price has to recover fast above 6400-6450 for the bulls to recover. With another triangle-like congestion happening between 6250 and 6050 since the big fall, price still points downside. A break below the smaller triangle would probably take price down to the 5700-5800 support where the bulls will probably be waiting to get in. At the same zone, the bears might take some profit and complete a bearish impulse wave. A rally could happen afterward back to 6250-6500 to test the bearish resolve again. A 3-wave bullish correction should follow after the current bearish impulse wave ends to/close to 6700-6800.

FCA Warns About Authorized Companies been cloned to Fraud Investors
Forex Crypto
Top 5 Forex Brokers
Top 5 Crypto Exchanges
Your subscription could not be saved. Please try again.
Thank you for subscribing. You will be the first to receive all the latest news, updates, and exclusive advice from the AtoZ Markets experts.
Everyone is reading
Ripple Lawyers Object SEC’s Request to Extend Discovery Deadline
Ethereum Sustains Below $2,500 Psychological Area - Bears to Push the Price Downside?
EUR/USD, GBP/USD, BRN/USD and BTC/USD 9 June Live Entry Points
close ×