May 21, 2019, | AtoZ Markets – Malta’s leading blockchain advocate and the Parliamentary Secretary for Financial Services, Silvio Schembri, has recently announced, about the first blockchain based government authority. The Maltese Registry of Companies running on a blockchain system will make Malta the first country in the world to run a government agency on this technology.

Malta’s interest in the blockchain is growing

Malta, along with Switzerland is considered as one of the most blockchain-oriented regions and the leading center for blockchain and cryptocurrency. Recently, Atoz Markets made a short overview of the upcoming 2019 Malta Blockchain Summit which is taking place on May 22-25 and expected to bring a significant number of investors, crypto enthusiast, and startups. It is obvious, that the country’s curiosity over the blockchain technology cannot be denied.

In July 2018, the Maltese Government passed three bills into law, for cryptocurrencies, Distributed Ledger Technology (DLT) and blockchain. By April 2019, the Malta Financial Services Authority (MFSA) has approved 14 blockchain companies that applied for Virtual Financial Asset (VFA) agent status in November 2018. In addition, according to the media reports, the country’s Parliament has also licensed 3 cryptocurrency and blockchain expenses in the last 12 months. Since then has grown a number of startups interested in settling their companies at the island.

Malta as a small island state, which some people call just crypto, remains one of the few countries that has introduced some form of regulation to manage the cryptocurrency and blockchain industries.

The first in the world blockchain-based government authority

Parliamentary Secretary for Financial Services Silvio Schembri explained that the new blockchain-based government agency will handle all of the processes performed by the Registry of Companies and “will make possible the provision of new services which with the present system are not being provided bringing the agency.”

The Registry of Companies as a public registry is responsible for the registered information and documentation pertaining to new and existing companies. Through the new Legal Act, the agency was given the responsibility for all assets, liabilities, and obligations which were previously vested or entered by the MFSA.

In his Twitter, Schembri stated, that the new standalone agency will be “the first in the world to be run by a blockchain system.” He outlined, that “through extensive investment in IT, the Registry of Companies will be more efficient and will lessen unnecessary bureaucratic procedures.” 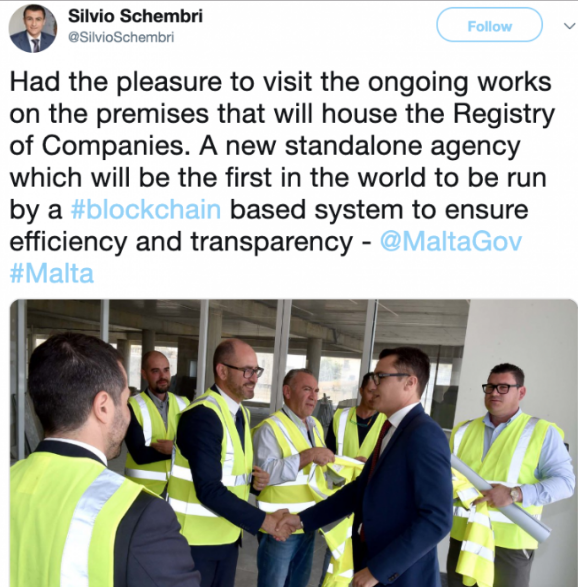 The country’s initiative to launch the first blockchain-based government facility correlates with the growing number of the company registrations in Malta.

In just six years the number of firms aiming to register their entities in the island state has increased by 55 percent. It is notable that the country has become a major destination for companies operating in the online gambling, gaming, and technology sectors.

Malta attracted major players in the cryptocurrency market like Binance, Nebula, BitBay, Alphahex, and more. The result has been a massive increase in the trading volumes passing through Malta, with 56.1 billion dollars being traded through Maltese-registered exchanges in March 2019 alone.