Looking for a great Breakout trading strategy? You can stop right now – this London Breakout Forex Strategy is an easy way to lock in profits from sudden spikes in trading volume!

AtoZ Markets – Today we will be discussing the London Breakout Forex Strategy – one of the most useful and practical breakout trading strategies. This strategy is specifically designed to benefit from a sudden spike of trading volume near the London Open session.

Why was the London Breakout Forex Strategy created?

London is known for its position in the global dominant Forex center, London is also the center for all Forex trading activities during the European session. As the strategy name implies, the concept behind the London breakout strategy lies in the crossover of the Asian session and the London session. This strategy is one of the easiest and simplest strategies in the Forex market.

Basics of the London Breakout Strategy

Now let’s move on to the basics of the London Breakout Strategy. AtoZ Markets team has outlined below the key elements you should know about this strategy:

The London breakout FX strategy works well on the E-Mini Dow Jones Futures from the Chicago Board of Trade (CBOT.) Furthermore, this strategy will work well in the following currencies, such as:

It is always important that you should try it out on a simulated platform before committing any real money to the strategy.

In order to catch the right moves during the London Open, you will not need any specific indicators. However, one thing is strongly recommended – use a one-hour Forex chart. Moreover, you will need to use proper risk management techniques. As for the currency pairs, you can focus your attention on:

How to trade with the London Breakout Forex Strategy?

As we are coming to the London session in a range, we already have an entry point due to that range. In order to trade the London Breakout Forex Strategy, you need to follow the next steps: 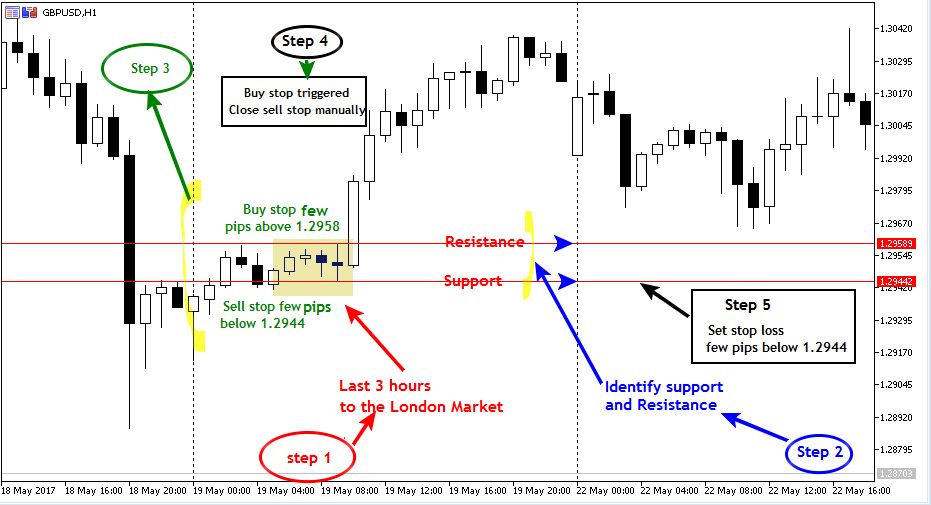 Trend direction of GPBUSD after the London session

Another factor you should consider ahead of the London session is the Frankfurt session. This is another big market that opens an hour ahead of the London session. The opening of the Frankfurt market causes a minor wave of volatility before the big wave that London brings. It somehow widens the range, making returns a little bit lower. In some cases, if the Frankfurt open caused to wide of a range prior to London open, it is best to stay out of the market as much of the possible move might have already been made by the market.

Pros of the London Breakout Strategy

Cons of the London Breakout Strategy

If you want something more easy to start with rather than the London breakout strategy? There are lots of other Forex strategies that would allow you can choose from. Most trading strategies, even the simple ones, are good enough for you to start your Forex trading journey, as it could let you make decent profits while learning how to properly analyze charts.

So what is your opinion of the London breakout strategy, is it a strategy that you would use? Let us know in the comment section below.

This article was updated on 27 September 2019 by Amandeep Sonewane

Do You Know How Rating Agencies Affect Your Investments?

Do You Know What the Hidden Message Was in the Fed’s Statement?

Which Is Best Either Investment and Stock Trading in 2021

How Is the Stagflation That Everyone Talks About?
Forex Crypto
Top 5 Forex Brokers
Top 5 Crypto Exchanges
Everyone is reading
Ripple Accused SEC of Unwillingness to Respond to Inquiries in Court Case
Ripple Announces $44 Million ESG Investment with Nelnet
Bitcoin Climbs to $60,000 After Reports of Imminent ETF Approval
close ×