Litecoin surges to $100 on Thursday as the cryptocurrency market recovers. The following technical insight is based on the Elliott wave theory.

July 18, 2019 | AtoZ Markets - The cryptocurrency market recovered slightly on Thursday after a very bearish run so far in July. At the end of June, Litecoin exchanged for $147. However, from July 22, LTC had a massive 46% drop to $76 in just over three weeks. In the same period, the crypto market lost over $125 billion. Bitcoin continues to dominate with over 65% even in the current bearish market.

On Wednesday and Thursday, the cryptocurrency market recovered slightly - added over $28 billion after the drastic falls. Litecoin rallied almost 30% to $100. In the last 24 hours as well, LTC has gained 10% and currently has a market capitalization of $6.07 billion. Will the current recovery grow into a new bullish swing far above the $147 high.

Litecoin halving is coming up on August 5 - barely three weeks time. According to Litecoinblockhalf, the exercise will take place on the 1,680,000th block. Litecoin halving tends to cut LTC mining reward by half. This is expected to cut down the supply of LTC in circulation and drive its price higher. Though there is no guarantee that price will surge much significantly, it's still one to look forward to. The technical pattern on the LTCUSD price chart, however, shows the 2019 bullish trend could resume across the board.

In our last Litecoin price prediction, we anticipated a drastic fall in price to $90 or $70 after the price went sideways for nearly two weeks. A bullish impulse wave had completed at $147 from the December low and a 3-wave bearish correction was expected to follow. The chart below was used. 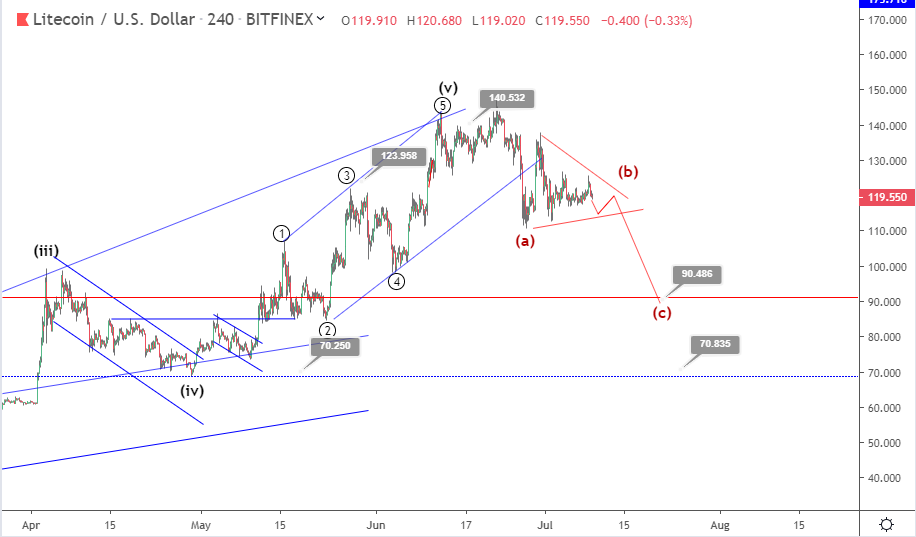 Price eventually dropped and was close to the second target at $70 before it bounced to $100 as the new chart below shows. 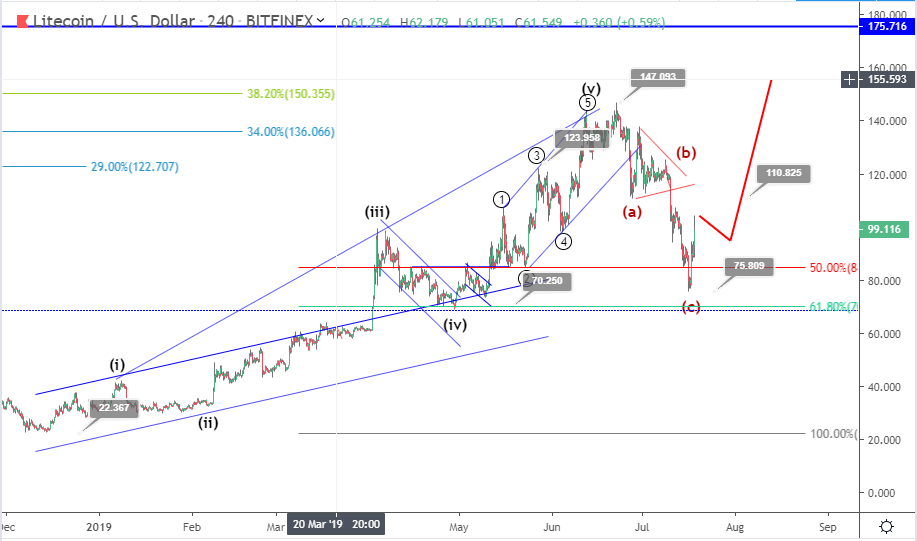 The a-b-c correction has probably ended just above the 61.8% Fibonacci retracement of the entire impulse wave rally from $22. The first confirmation will be a break above $110. The next bullish target will be at $175 before price aims for the all-time high.