The Litecoin price currently hangs in a sideways triangle. The following LTC technical analysis is based on the Elliott wave theory.

August 27, 2019 | AtoZ Markets – Litecoin is trading in a range that looks very much like a descending triangle pattern. After resuming the bearish correction on the 1st week of August from $106, the 5th largest cryptocurrency has dropped nearly 35%. It’s currently priced at $73. Meanwhile, since it broke below the $75 support level in mid-August, the cryptocurrency has spent all its time oscillating within a triangle range that ensured it never rallied above $79 and dropped below $70.

It’s very clear that the second half of the year has not been good compared to the first when LTC rallied to $147. However, from a technical perspective, the current price fall looks corrective albeit too deep for the comforts of the bulls. If this is so, the trend should resume after the current correction. Whether this will happen remains to be seen. Price activities in the coming week will reveal more information about the near-term future of the cryptocurrency market.

The corrective price pattern emerging from $147 is one that will most probably end very deep. Meanwhile, the pattern is suspected to be a double zigzag – almost similar to what is happening on the Bitcoin chart. The first zigzag ended at $75 after which price corrected to $106. The dip below $106 shows that price is making out the second zigzag pattern. By extension, this might continue to $50 (78% Fibonacci retracement of the December 2018 to June 2019 rally). In the last update, the chart below was used. 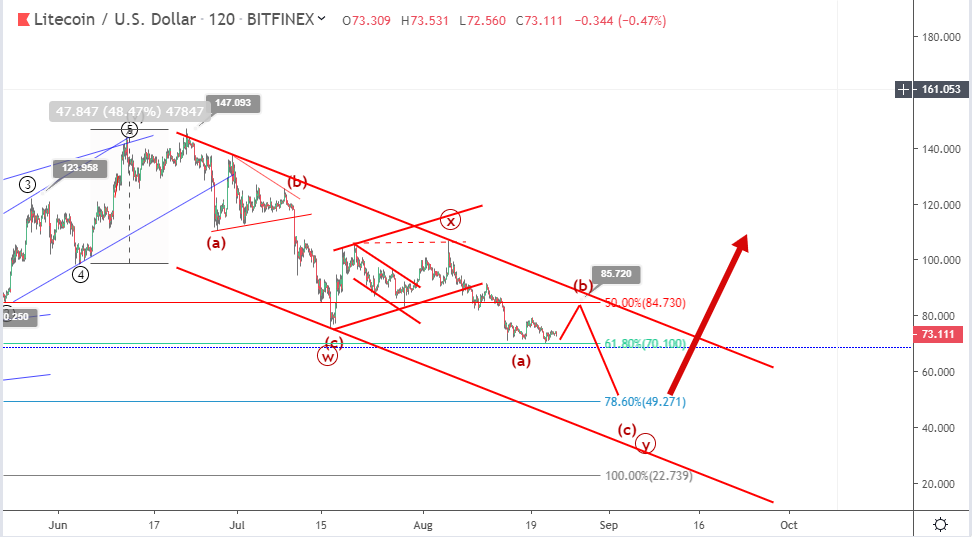 LTC price was expected to bounce toward $85 to retest the 50% Fib retracement level which also lay exactly on the channel roof of the corrective pattern. However, the price has gone sideways instead and has been there for about 12 days. The newly-updated chart below shows that the bias is still very much bearish. 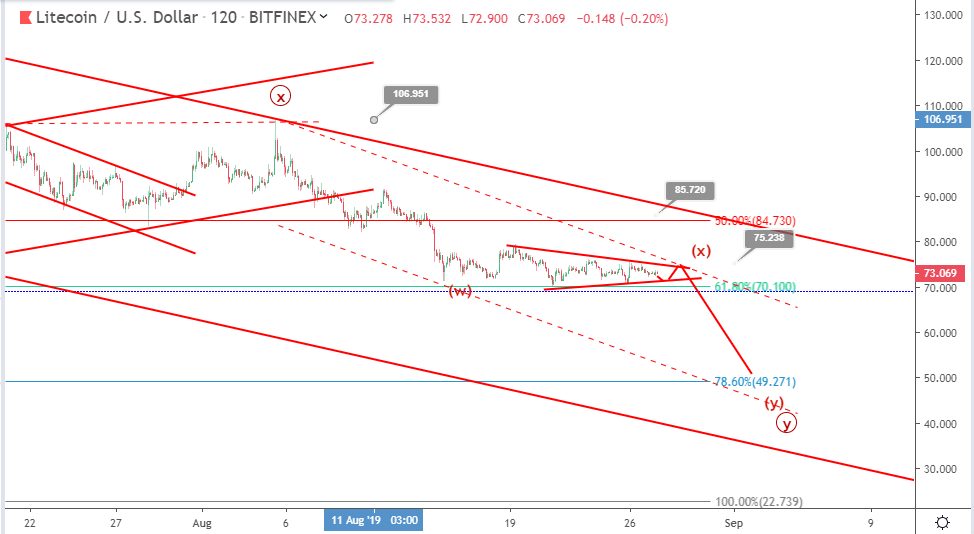 The 61.8% Fib-retracement of the 2019 rally is exactly at the $70 handle on which the triangle is currently sitting. If a bearish breakout happens, the 78.6 retracement at $50 and its neighborhood will be the next price target. Unless a massive break above the channel into the $100 handle happens, the sell-off has the potential to go even as deep at $30.