Litecoin continues to lead the gainers in the crypto market in 2019 after an impressive performance. What is driving the cryptocurrency to recover betters?

March 07, 2019 | AtoZ Markets – The cryptocurrency market has been doing well since bottoming in December 2018 after a fast break downward in November. Much of the gains seen between December and January was wiped off in the latter days of January but performances have come good again in February and March. Litecoin particularly has done better than most after almost hitting 100% gain in 2019. The cryptocurrency, which heavily depends on Bitcoin, has defied the norms and hit its best price since October 2018. Entering the price zone before the November breakout is rather impressive when compared to how others like Bitcoin, Ethereum and Ripple have performed in the same period. Earlier today, LTC price hit $59 before dropping to $57 at which it currently trades.

Price growth is not the only indicator of the Litecoin resurgence, its market capitalization and trade volume since the beginning of the year have skyrocketed. According to the data provided by coinmarketcap, LTC market cap has increased by nearly 90% since the turn of the year, from $1.8 billion to $3.4 billion. Trade volume has more than quadrupled, 461% from $356 million at the start of January to over $2 billion. The volatility awareness currently seen in Litecoin is unprecedented since 2018. It doesn’t need Bitcoin to trigger a move anymore; it leaves the top-ranked crypto behind. What have been the silent triggers?

One school of thought in market theory and analysis is that: the harder an instrument falls, the steeper it bounces. Litecoin was one of the biggest hit by the bearish market after it dropped about 93% from its all-time high. It has been one of the highest gainers in 2019 so far and this might be one reason. Aside from this theory, the cryptocurrency has also been buoyed by some fundamental factors.

Litecoin is fast becoming the choice coin of crypto transfer merchants and investors. People now prefer to use Litecoin instead of Bitcoin to transfer cryptos to other coins or fiat currencies. This is because Litecoin has a faster transaction time and lower transaction fees than Bitcoin. Its transaction fee is expected to be down ten times when an upgrade, Litecoin 0.17 is launched. Because of this, the demand for Litecoin is increasing and more than ever. This is evident in its skyrocketing trade volume which has grown over 450% in 2019 so far.

There are other factors which include growth in its lightning network and its upcoming halving which is hugely anticipated by crypto market participants. Litecoin will quickly hit 100% gain this year and will even do better especially if the entire market still looks healthy without a huge crashing sell-off. Recently, the Venezuelan government added Bitcoin and Litecoin to the payment gateways accepted for remittances on its ‘Remesas’ platform. 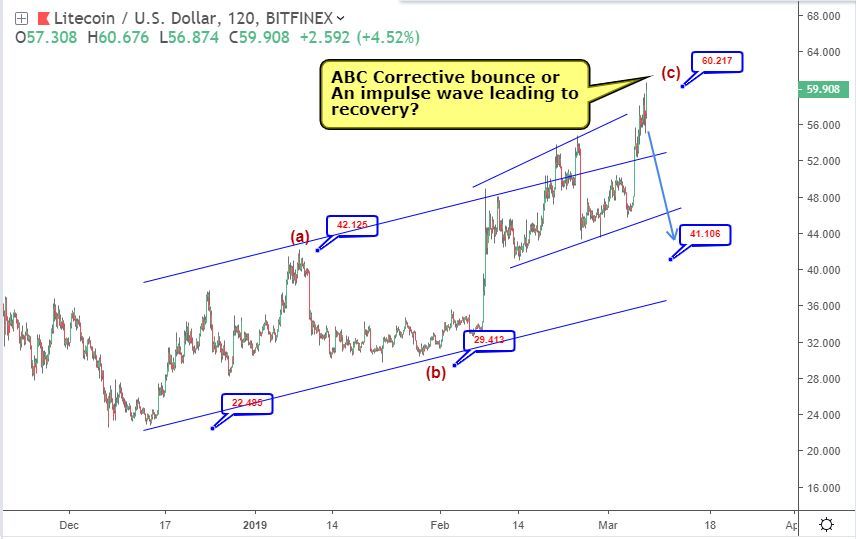 Despite the potential for more rallies in Litecoin prices, technical chart patterns show price could be overbought. A simple zigzag pattern from last year low seems to have completed with a wedge/diagonal mouth. These are bearish signals and price might fall to $40 or even lower in the coming days or weeks. However, Litecoin must show signs of strength above $65 to write off these price patterns. With the positive news around it, it surely could.