Litecoin price has doubled since the turn of 2019. Should the market expect better days ahead for this cryptocurrency?

March 18, 2019 | AtoZ Markets – Litecoin has been among the best gainers this year after hitting $60 to cap a 100% growth in 2019 with potential for more rallies. The cryptocurrency, which was modelled as an alternative to Bitcoin is growing out of the shadows of the flagship cryptocurrency. The gain started in December like in most other cryptos. In February alone, it surged over 15% and its market capitalization quickly hit  $3 billion for the first time since the November bearish breakout that saw most coins and tokens dipped to their 2018 lows. It now stands above EOS and Bitcoin Cash as the 4th largest crypto on coinmarketcap after many months below.

Litecoin was created based on the Bitcoin protocol. An open source peer-to-peer cryptocurrency that uses memory intensive scrypt proof-of-work (POW) algorithm. The only difference it has with Bitcoin is in term of the hashing algorithm used. Its open source feature allows for flexibility to improve on, and implement new technologies. One of the recently updated technologies is the SegWit and the Lightning network which allow it to be considerably faster than Bitcoin. This means that it could complete transactions at a much faster rate and for a far lower transaction fee. Will Litecoin become a better version of Bitcoin? Litecoin is in summary, meant to be the cheaper and faster version of Bitcoin. However, the emergence of Bitcoin Cash and some added features on Bitcoin have limited the growth of this cryptocurrency especially in 2017/2018.

Despite this limitation, Litecoin has performed better than Bitcoin and Bitcoin Cash in 2019. Since the market hit a bottom (temporary or permanent) in December, Litecoin has gained over 100%. The entire market dipped in January before recovering in February. While most of the top cryptos have not recorded significant net gains in 2019, Litecoin has not looked back after recovering from January dip.

Litecoin has benefitted from strong fundamentals and increased traders’ trust. Its quickness and low cost have attracted more users and thereby see its trade volume grown over 450% and market cap almost tripled in 2019 so far. The Venezuelan government’s recent acceptance of Litecoin as a mean of payment for remittances is one of many examples. Furthermore, its next upgrade is expected to boost its speed significantly and lower its transaction fees drastically. When the entire market is back very healthy, Litecoin is expected to still lead the way as it focuses more on features that users look out for most – speed and cost. 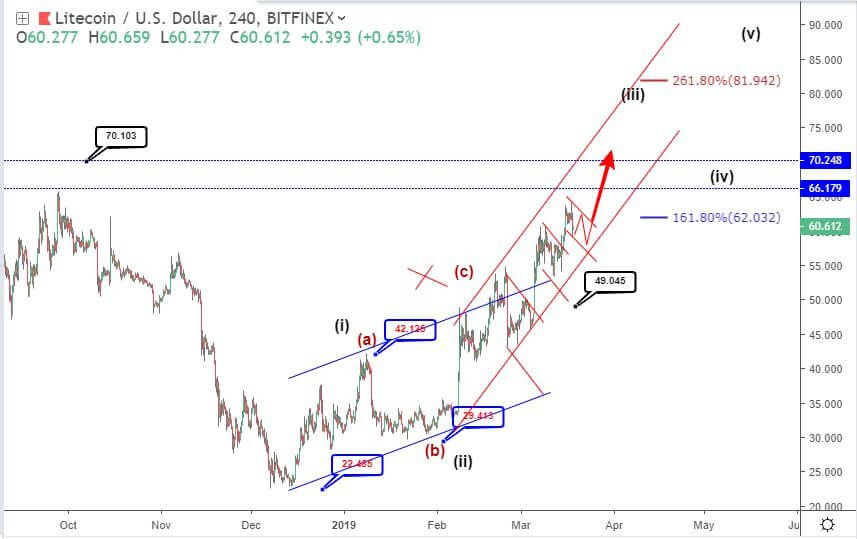 After the rally from $22.48 in December, it appeared a bullish corrective bounce would end at $45-50. However, the bullish strength was established invalidate a corrective outlook and set the price on continuous rallies to $60. An impulse wave is probably emerging, which might more room for the bulls to $65-70 (September 2018 resistance zone) and even $80 once price breaks away from the current minor dip.

Tags Litecoin price prediction LTC/USD forecast PIVX
Forex Crypto
Top 5 Forex Brokers
Top 5 Crypto Exchanges
Your subscription could not be saved. Please try again.
Thank you for subscribing. You will be the first to receive all the latest news, updates, and exclusive advice from the AtoZ Markets experts.
Everyone is reading
Top 5 Forex MT5 Indicators for 2021 you should try
Top 5 Cryptos to Watch in Quarter 2 2021
Bitcoin Facing Resistance Around $60,000 Event Area - What Next?
close ×