June 10, 2019 | AtoZ Markets – Litecoin has continued its 2019 great performance as it rallies above $125 on Monday. After nearly 20% dip from $122 to $98 between May 29 and June 4, the cryptocurrency responded with another 30% upsurge to now become the 4th top ranked cryptocurrency on coinmarketcap. Litecoin is leading the gainers today with over 7% surge in the last 24 hours. This big response from the Litecoin bulls has now seen the cryptocurrency banked nearly 500% gain since December 2018 low.

The market has been bearish with just minor recoveries in-between dips. While Litecoin like the rest, started the month bearish, it has recovered completely and has now broken above $121 previous 2019 high. Some have attributed the current rallies in Litecoin to its hashing algorithm and market fundamentals. Just recently, it hit its highest ever hash rate. One of the perceived favourable fundamentals is the upcoming ‘halving’ that is aimed at reducing mining rewards by half every four years. The last ‘halving’ took place in August 2018. Therefore, the upcoming ‘halving’ is expected on August 8 2019. Litecoin currently trades at $127 with a market capitalization of $7.84 billion.

Litecoin is in the 5th wave of an impulse wave rally. Bitcoin cash and Bitcoin also display similar pattern but LTC is ahead. Bitcoin and BCH have not yet completed their respective 4th waves. In the last LTCUSD Elliott wave update, we used the chart below. 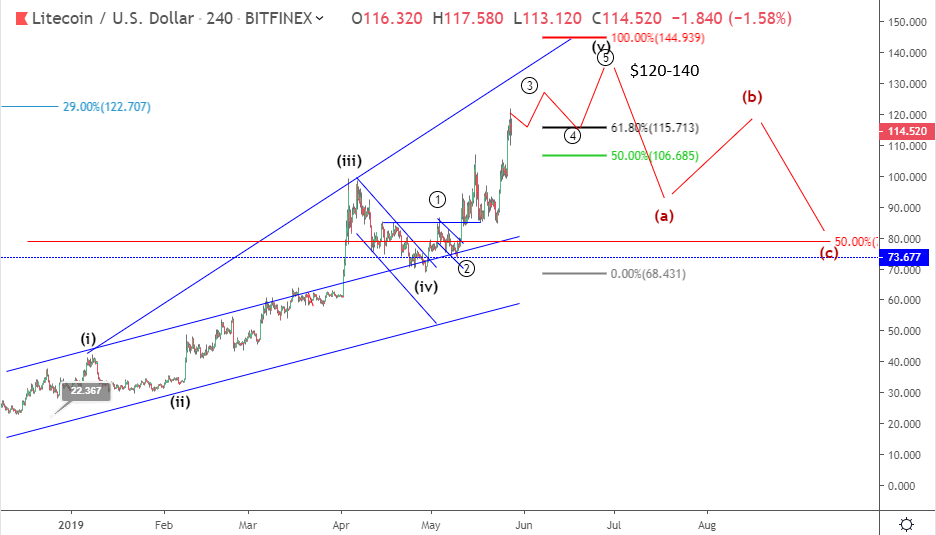 The chart above shows that we expected the 5th wave to continue to $120-140 zone. This is exactly what is happening as LTC burst upside. What pattern is emerging on the 5th wave? Ideally, we will expect an impulse wave or ending diagonal from $68 (end of wave iv) before a big bearish correction follows. The chart below shows ending diagonal looks more likely. 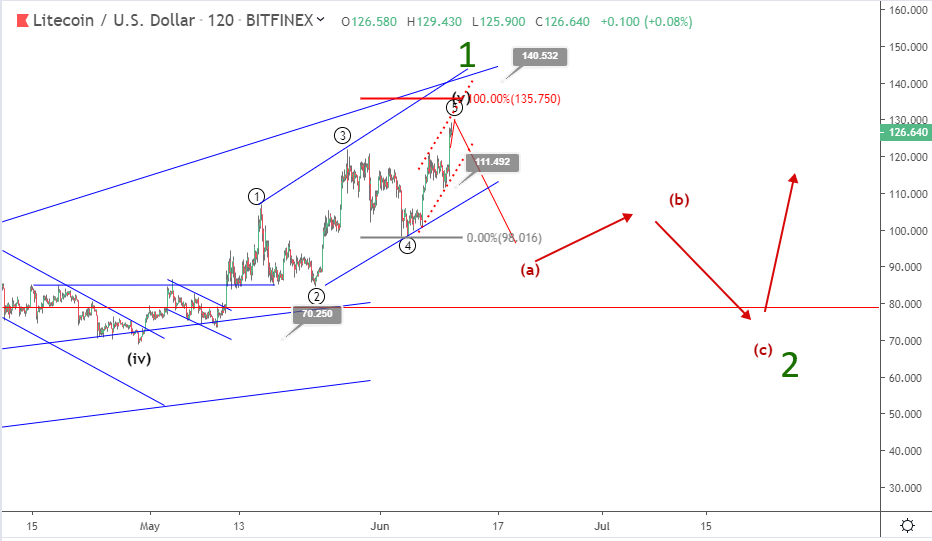 The 5th wave is emerging into a wedge/ending diagonal pattern. Price is currently at the 120-140 resistance zone. The bullish momentum might dry up and be followed by a 3-wave bearish correction to $80 before the bullish trend continues toward $500.