Litecoin could be at preparing for another bullish break after dropping 20% in over a week.

April 18, 2019. AtoZ Markets – The April crypto bullish breakout pushed Litecoin to nearly $100 leading to a 340% increase since the December 2018 low and over 200% in 2019. Litecoin, as a result, saw its trade volume skyrocketed and is consistently among the top gainers since the current crypto market recovery started. Litecoin has maintained an over $2 billion 24 hours trade volume for the first time in over 6 months. Market capitalization is currently close to $5 billion. However, Litecoin has dropped in the Coinmarketcap market cap rank from 5th to 6th with Bitcoin cash forcing its way back above.

Meanwhile, the market is retreating from the upsurges. Litecoin has dropped over 20% to hit $75 this week with eyes on the $66-$70 support zone. The current dip could be followed by another upsurge especially if price holds above $66-70 support zone. A break below this zone will most likely lead to more sell-offs. There is much confidence among the crypto bulls especially since the April 1-4 bullish breakout that led to 10-30% gains among the major cryptos. The current dip is well formed within a falling technical channel with its base possibly at the support zone.

After such a sudden spike, it was expected that the market was overbought and would most probably retreat. A lot of buyers would have loved to cash out and waited for another dip to get in again. Besides, there are now short selling opportunities made available by Crypto CFD providers. In the last update, where the chart below was used, we expected a dip to $80 at least. The pattern of the dip couldn’t be determined beforehand. A sideways triangle move or a much deeper ‘zigzag’ dip were the two most likely possibilities. 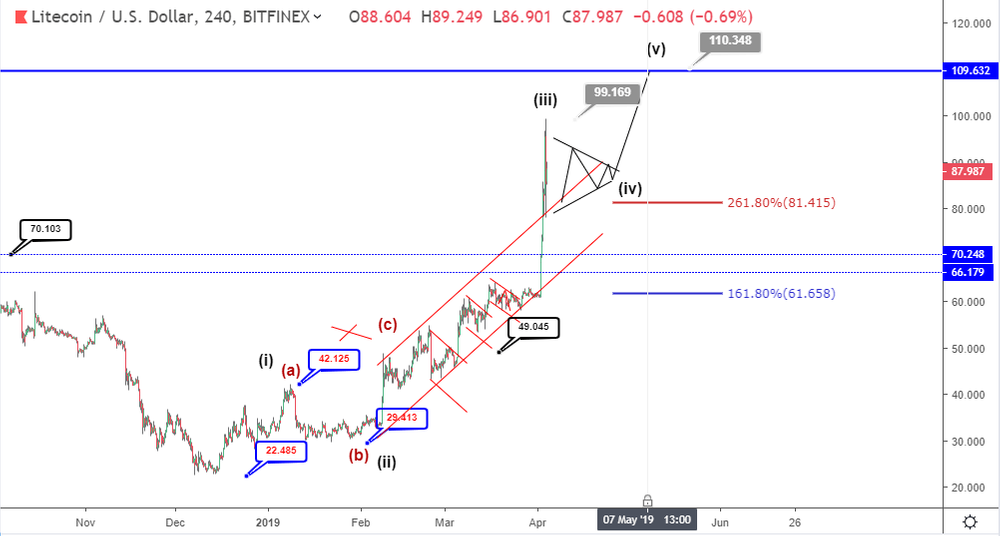 Price went for the latter – a dip down into the narrow rising channel. The impulse wave we intended is still intact as the updated chart below shows. 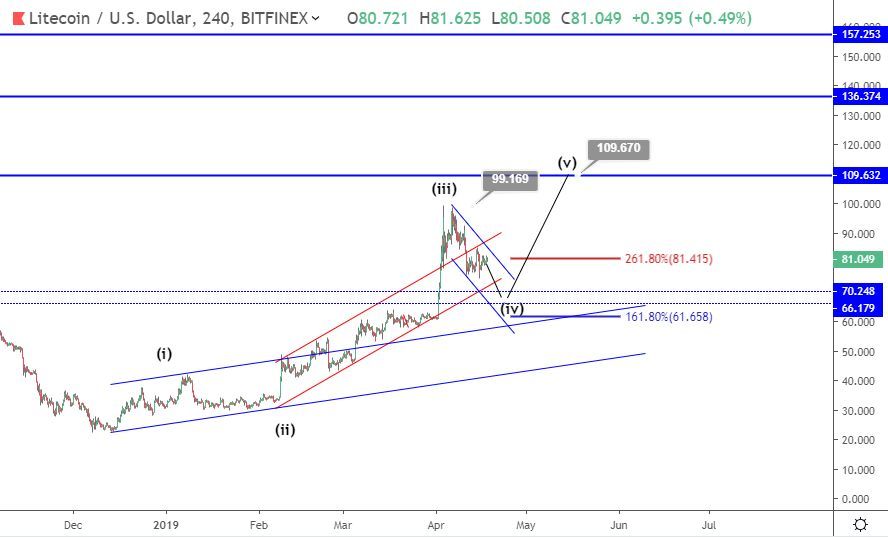 The current dip is the 4th wave of the potential impulse wave rally from the December 2018 low. The 4th wave could dip further to the support zone above $60. A break above the wave (iv) falling channel could lead to a new high at $109 or $136. On the other hand, if a fast dip happens below $60, the sell-off will most likely resume.