11 September, 2019 | AtoZ Markets – The development team behind SegWitCoin (BTC) and it’s Lightning Network- Bitcoin core had issues. Rusty Russell, who is a software programmer and has been involved with the project, uncovered vulnerabilities recently that could lead to the loss of cryptocurrency and sent out a warning to the community to upgrade the network’s nodes. However, a new report sheds light on the issue and reveals that the warning may have come too late. The vulnerabilities may have already been exploited.

Lightning Labs and ACINQ’s CTO Speaks About the Vulnerabilities

Olaoluwa Osuntokun, the chief technical officer (CTO) for two startups tied to the Lightning Network – Lightning Labs and ACINQ published a statement about the issue on the Linux Foundation’s website yesterday. He proclaims that there are “confirmed instances” of the vulnerabilities have been exploited and, like Russell, urges node operators to upgrade as quickly as possible.

As with all software in any environment, but particularly in financial settings, all linked applications should always keep up to date.

Lightning Labs recognizes the vulnerabilities and cautions users to avoid the network. The company addressed that this is also a great time to remind folks. It has limits in place to mitigate widespread funds loss at this stage. 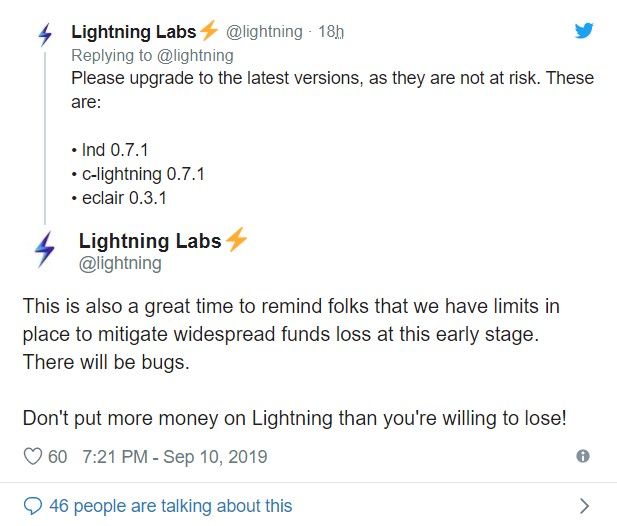 The Lightning Network introduced in December 2017. The Core team decided that scaling the network was an impossible task. It has stuck in beta testing since then. It has been live on BTC’s mainnet since January of last year. Two years under beta seems like a ridiculously long time. But it proves that the solution is not as robust as developers had expected.

Moreover, the solution has been problematic from the start. It already targeted in at least one dedicated denial of service attack. It tries to circumvent the integrity of the blockchain’s core protocols and doesn’t deliver the results intended.

Despite BTC developers’ belief that large blocks aren’t possible on any blockchain. The world already knows that this isn’t true. Bitcoin SV’s (BSV) Quasar upgrade successfully. It led to blocks of two gigabytes mined on the BSV blockchain.

Crypto.com Signs Lucrative Sponsorship Deal with Paris Saint-Germain
Forex Crypto
Top 5 Forex Brokers
Top 5 Crypto Exchanges
Your subscription could not be saved. Please try again.
Thank you for subscribing. You will be the first to receive all the latest news, updates, and exclusive advice from the AtoZ Markets experts.
Everyone is reading
Cryptocurrency Market-Experts Make New Predictions
FCA Publishes New Strategy to Scams and High-Risk Products
Cryptocurrency Adoption in Africa Increases Significantly by 1200%
close ×