Yes, Bitcoin just hit another high and left investors wondering about the new moves of this cryptocurrency. What awaits it in the future? What has prompted its recent surge? We discuss 5 key Bitcoin Price drivers Behind the Recent Rally in this article!

13 October, AtoZForex – The king of the top cryptocurrencies, Bitcoin, has reached yet another high on Thursday, marking an all-time high at $5,829. Prior to its recent rally, the digital currency has suffered some losses on series of critical comments, which included J.P.Morgan Chase CEO’s remarks, Jamie Dimon. He has called Bitcoin a “fraud”.

Nevertheless, we saw Bitcoin hitting another crazy high this Thursday. As of now, the currency is trading at $5652.22. In early September, the cryptocurrency has been trading around $5,000, while has risen from its September’s low of $2,985.24 by 75%. 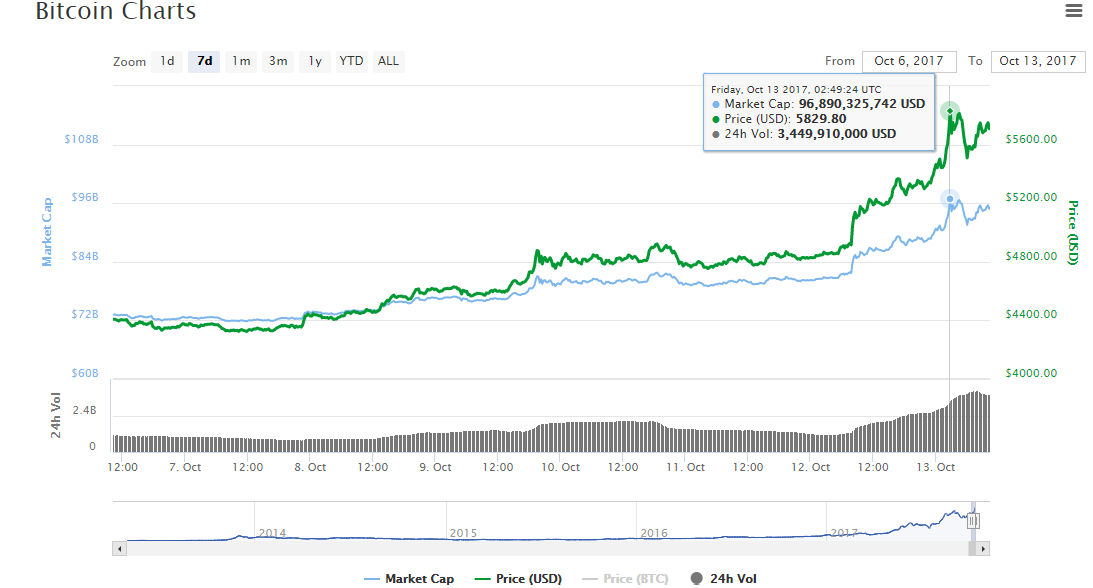 Yet, what has been pushing Bitcoin higher past weeks? There are few Bitcoin Price drivers that are responsible for the latest developments in its price:

Some of the traders are betting that the upcoming hard forks in core Bitcoin will advance the holding of digital currency assets. Just like that, on October 25th, so-called Bitcoin Gold will be launched. It is created to address some challenges mining for Bitcoin using computers.

Another fork will take place on November 18, while Bitcoin will face a second version of Segregation Witness. SegWit2x would create an alternative version of Bitcoin.

Reason behind Bitcoin Price rally #2: China to soften its stance?

As you may know, China has moved to stricter policies in regards to Bitcoin. Rumours spreading across the world that China plans to extend bitcoin exchange ban, possibly even mining.

However, Charles Hayter, chief executive officer and founder of CryptoCompare, stated that there is a possibility that China might license digital-currency exchanges. Also, it may allow them to reopen after a recent ban.

Reason behind Bitcoin Price rally #4: Fear of missing out

Fear of missing out – FOMO, also might be acting as one of the key Bitcoin price drivers. Since global news is reporting newer and newer price records of Bitcoin, this could trigger more investors to put their funds into the crypto market.

While Bitcoin is enjoying all the attention from the regular investors, the Wall Street veterans are also eyeing the crypto situation. Just like this a co-founder of the alternative asset manager, Fortress Investment Trust, Michael Novogratz believes that Bitcoin could hit $10,000 in the period of next six to ten months.

In the meantime, Goldman Sachs Group explores a new trading platform that would concentrate on trading on Bitcoin and altcoins.