Bank of America Merrill Lynch expects the Fed to keep US interest rates on hold, but leave the door open to for a rate hike later this year. Since the June FOMC meeting, US data made several surprises which the bank expect will result in somewhat cautiously optimistic tone in the July FOMC statement.

Markets have quickly corrected from the dramatic reaction to Brexit, “so an improving trend of US data will continue to lend the USD support with the market pricing slightly less than a 50% chance of one hike by year-end,” BoAML added.

Remaining global risks likely limit the scope of 2016 Fed rate pricing, so the investment bank believes a more significant repricing of 2017 – 2018 Fed expectations is needed to materially move the USD higher from here along with the easing expectations by other central banks like the ECB.

Bottom line, “in the absence of significant statement changes, FX moves are likely to be limited on the back of the Fed meeting,” BoAML concluded.

Citi bank finds that the aggregation in the US raw data surprises has been a consistent historical indicator for hawkish FOMC bias and performed well in trading EURUSD.

“With hedge fund positioning suggesting a long USD bias and the US ESI at 2-year highs, we are likely to see a USD bid into the next (this) Fed meeting,” Citi noted.

Comparing event risks RMB variation is being readily absorbed, Brexit has passed, and related contagion fears for the US from the UK or China are proving to be greatly exaggerated. 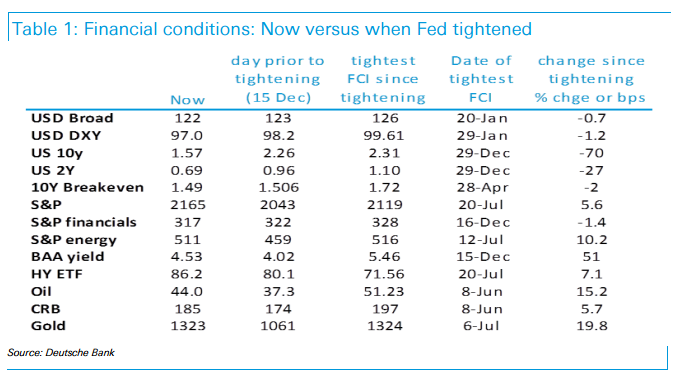 Comparing the US data for November 2015, the ISM manufacturing is higher by 5pts, 3m average of retail sales excluding autos is up from 0% to over 8% annualized. While 3m average of NFP has declined from 241K to 147K as might be expected at this point in the cycle. Lastly, the U3 unemployment and U6 underemployment rates are lower by 0.1% and 0.3% respectively.