December 12, 2018 | AtoZ Markets - After one of the worst dips in the short history of cryptocurrencies, a technical indicator is suggesting it might be the right time to take the advantage of the dip.

For most of the traders, Bitcoin’s recent price drop is a sign to sell off their assets or hold. But smart investors understand that the best time to invest is during a bearish trend. While it is true that buying Bitcoins or other cryptocurrencies right now is of huge risk. The reality is that some “big whales” might be investing. It is not the only problem. There is also the very real problem of the crypto price further plunging and no one can accurately tell where the bottom will be this time. For many, it’s just a speculation game.

Previously, some analysts have predicted that Bitcoin’s new floor would be around $4,900 levels. But, the price of Bitcoin even dropped to $3,248 lows.

Should You Buy Cryptocurrencies Now?

Whenever the cryptocurrency market doesn’t perform well, it is logical that people would be cautious about investing. Bitcoin is particularly concerning because it’s price never drop below the $5,000 level this year. Hence, it is understandable that traders would be worried about this new low price and its potential effects.

According to the Bloomberg’s Galaxy Crypto Index, which tracks cryptos including Bitcoin, Ethereum, Monero etc. It suggests that the coins are in oversold territory based on the GTI Global Strength Indicator. This indicator measures the strength of the price by comparing individual upward or downward movements of successive closing values of the cryptocurrencies.

Additionally, the last time the index was oversold in late November. Later on, it surged about 20 percent from 242 to 290. 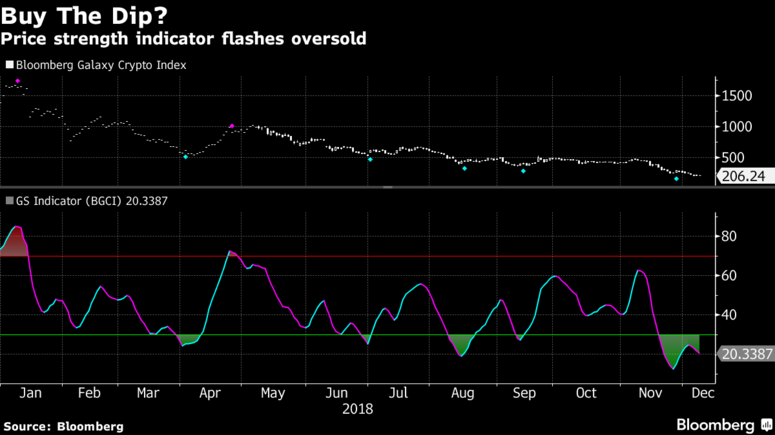 While the crash is unlikely to be indicative of a longer-term trend. The gauge suggests that a small corrective rally might be in play as the index approaches its low of the year and psychological support level of 200.

The last three times the index was below this level and it posted a moderate increase over the following weeks. Moreover, Bitcoin is down almost 50 percent since early November, and most other cryptocurrencies have touched the lows.

Tags Bitcoin Cryptocurrency Ethereum Monero
Forex Crypto
Top 5 Forex Brokers
Top 5 Crypto Exchanges
Your subscription could not be saved. Please try again.
Thank you for subscribing. You will be the first to receive all the latest news, updates, and exclusive advice from the AtoZ Markets experts.
Everyone is reading
Is Forex Trading Halal or Haram in Islam?
Top 5 Forex MT5 Indicators for 2021 you should try
Top 5 cryptocurrencies 2021 | Best Cryptocurrency To Invest
close ×