Bitcoin hit $4,000 for the first time in March. Will the bullish momentum be sufficient to cause a full recovery?

March 19, 2019 | AtoZ Markets – Since it peaked above $4200 in January, Bitcoin has not seen a higher price in 2019. It has had more than two failed attempts to stay above 4000. The bears are exerting so much pressure on the market while the bulls stay unrelenting in their attempts to win this time around. The bulls knew that a push above 4000-5000 would lift the market enthusiasm and set the atmosphere back booming. Ultimately, a push to 6000 will lift the market away from the bearish forces and might lead to a full recovery. This week, there is another push to 4000 and price has stayed above slightly according to prices on Coinmarketcap.

After another break above 4,000, an ardent crypto bull, Tom Lee has suggested again that the market is not far from staging a recovery. Tom Lee, the co-founder of Fundstrat Global Advisors, is one of the world’s most vocal Bitcoin bulls. He had at a stage predicted that Bitcoin would hit $250,000 in a few years’ time. In 2018, when crypto prices were hitting new bottoms, Tom was still very bullish and expected prices at 7500 in the first half of 2019 citing the price as a ‘break-even’ price for Bitcoin miners. He enthused that price would get attracted to 7500 and wouldn’t stay long below it.

Traders and investors often watch price activities at round numbers as Lee said that ”round numbers are important”. He stated the importance of a sufficient break above $4,000 for the bulls.

After last year’s bearish market, many investors and traders were scared off. In less than a year, Bitcoin plummeted from close to $20,000 to $3,100 – about 84% decline. The cryptocurrency market, which was projected to hit $1 trillion in 2018 dropped to $133 billion in just about a year. The market definitely needs a period to fix its reputation and Tom Lee opined that 2019 is the period. He said: ”If time is needed, then 2019 is the year where the market starts to build better risk-reward and then the breakout happens next year”

It’s difficult to say as the market still undergoes serious repair and rebuilding. The rally will start steadily and the market will build on it then followed by a big breakout. The market will then build on the new market enthusiasm and make new highs. However, currently, the rally from 3100 still looks corrective until a break into the 5800-6000 zone happens. 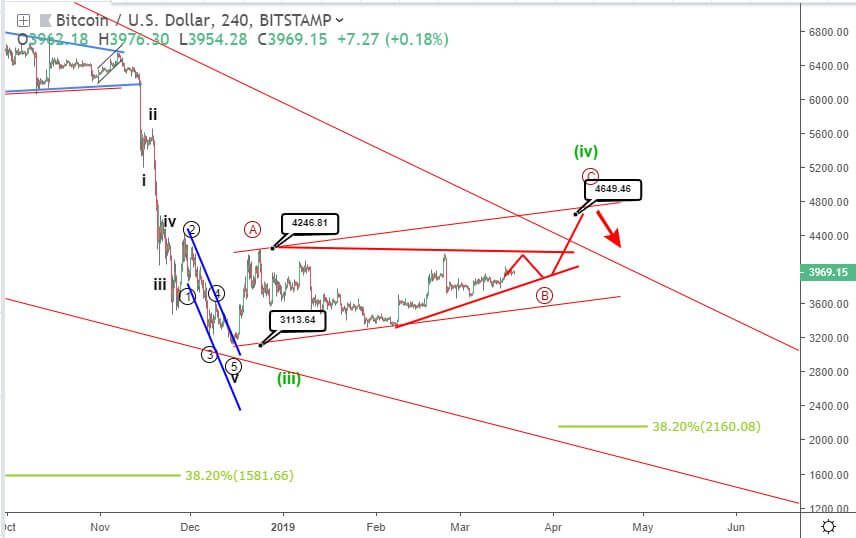 From the technical analysis perspective, the current rally is most likely the 4th leg of the last leg of the bearish phase. It seems the bearish phase is in the last stages. The 4th wave is expected to continue above January high of 4,200 to hit prices in excess of 4,500. At that level, the next price action would determine whether a new low would happen before the recovery fully begins or the recovery is ongoing with a break into the 5,800-6,000 zone.

When asked if the recovery has already begun, Tom Lee said ” I wouldn’t draw sweeping conclusions. At the bottom, people won’t be bullish”.

Tags Bitcoin technical analysis BTCUSD forecast Crytpocurrency Tom Lee
Forex Crypto
Top 5 Forex Brokers
Top 5 Crypto Exchanges
Your subscription could not be saved. Please try again.
Thank you for subscribing. You will be the first to receive all the latest news, updates, and exclusive advice from the AtoZ Markets experts.
Everyone is reading
Is Forex Trading Halal or Haram in Islam?
Top 5 cryptocurrencies 2021 | Best Cryptocurrency To Invest
How to Setup Monero Mining in 2021?
close ×