Bitcoin has experienced about a 82% decline from last year's all-time-high. After a very impressive 2017 performance, 2018 has gone exactly opposite.While last year people where asking when will Bitcoin hit $1 million, now the most common question is " Is Bitcoin dead? "

30 November, AtoZMarkets – The cryptocurrency market experienced in a quick pace popularity last year, as many investors felt Bitcoin was the asset that guarantees an explosive profit. That seemed unarguable at that time. Considering that at the start of 2017, Bitcoin was barely trading at $1000, but by December it had skyrocketed by nearly 1880% to trade at $19800.

Between November and early December 2017 alone, Bitcoin gained about 250% to make the cryptocurrency market wildly popular. Yet, how different the year after could be? Well, price of the king of the cryptocurrencies, Bitcoin, fell by 82%, trading at the time of writing below $4000. From market capitalization perspective, Bitcoin maintains more than 50% of the crypto market dominance. Therefore, the effect Bitcoin price correction was felt across other cryptos, tokens and even mining operations. As a matter of fact, cryptocurrencies have lost over 80% of their market values in 2018. This prompted the market to question whether Bitcoin is dead? But is it?

So, is Bitcoin dead? To answer this question, let's have a look at historical BTC trends, from yearly charts it can be clearly seen that such bear and bull markets are nothing new to bitcoin. In fact, the current bear market is not the worst so far, though it has the potential to be. Meanwhile, the gain in 2017 was also not the best that the cryptocurrency had experienced. So far, bitcoin had done better than the 2017 performance and worse than the 2018 bears.

When analysing the past, in 2010 when BTC began trading, bitcoin was valued at just a fraction of a penny. The early investors accumulated big wealth when its price skyrocketed in the years that follow. After Bitcoin got out of the 'cent zone' to trade in the 'dollar zone' the first big move started in April 2011, when BTC hit above $29 by July 2011, marking a 2800% gain which is far more than the 1880% gain recorded in year 2017. Shortly after the July 2011 peak, the very first BTC crash had a bottom just below $3, accounting for more than 90% price slump. In 2011, the BTC trading volume was very low and there were no popular digital coin exchanges. Back then, the Japanese bitcoin exchange, Mt. Gox handled nearly 70% of all cryptocurrency transactions around the world. The next Bitcoin bear market happened in 2013 after Mt. Gox experienced a series of cyber attacks. 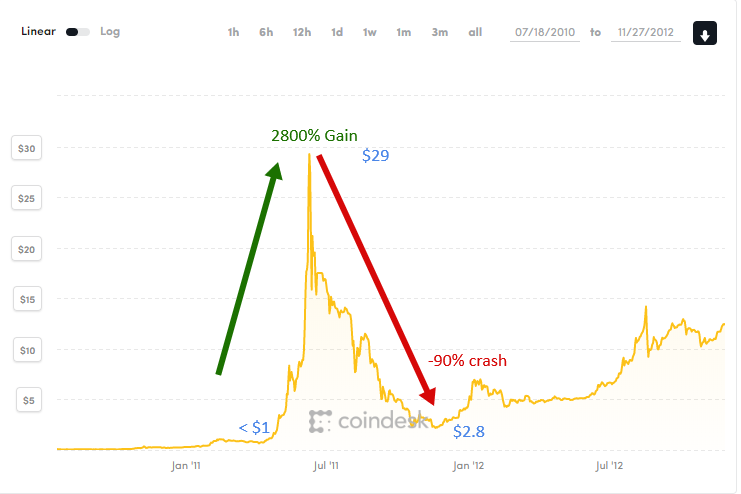 Yet, soon after bitcoin experienced its second bearish phase with an 84% decline to $175. This decline took place between November 2013 to January 2015. During this time, most of bitcoin trading was still done on Mt.Gox exchange. After series of cyber attacks, Mt Gox was eventually frozen out of the U.S banking system by regulatory bodies. The company stopped trading activities, closed its website and filed for bankruptcy.

In the years following the turmoil caused by Bitcoin Mt. Gox crash, BTC regained its stability and gradually found its way up again. For the rest of 2015 and all of 2016, Bitcoin recovered and rose close to $1000. 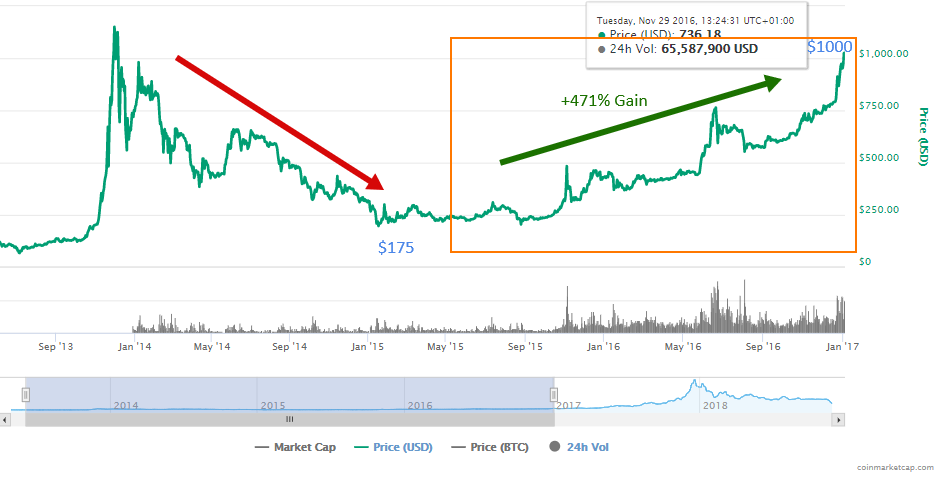 2018 Until Present | Is Bitcoin Dead or new cycle starts now?

By the end of 2017, market capitalization had gone very high and was projected to hit $1 trillion in 2018 if it continued with the 2017 trend. But the market turned bearish in 2018. The current bearish move has resulted in the most ever loss in dollar values. In market capitalization, roughly $700 billion has been wiped off. There are two things to note during the previous declines. 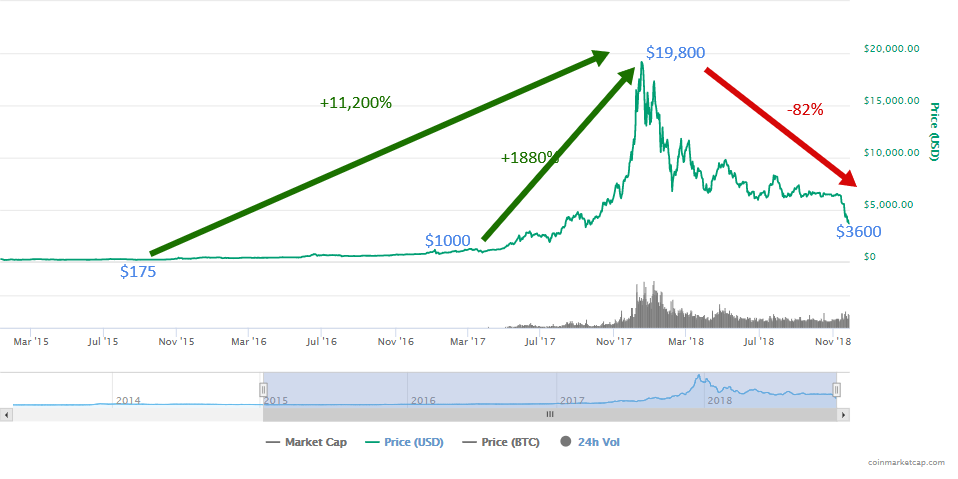 While most people blame ICOs and regulation for Bitcoin's 2018 freefall, the biggest party to blame is most probably CoinMarketCap, the price aggregator platform. Not like in the previous bear//bull cycles, in 2017 and 2018, market already attracted algorithmic traders.

In early January, CoinMarketCap decided to eliminate South Korean exchanges' prices from the general price aggregation. Being one of the highest crypto-savvy countries, South Korea had also higher prices as well. Thus, eliminating the prices from Korean exchanges, gave a signal to many of those algo trading tools to short many of those digital assets.

Of course, CoinMarketCap is not the sole reason for the year's complete crypto drain. The industry itself, had many challenges as well, including a number of crypto exchange hacks, as well as Bitcoin ETF discussions that has no end.

But why did Bitcoin price go below $5000 in November? There is no one single answer for this, however, the catalyst was again algo traders. OKEX had an issue on their BTC futures, which triggered once again all the sell orders.

Where is Bitcoin price bottom?

Historically, the base should be $1000. The current decline is very much likely going to continue. The factors believed to contribute to the current bear market are not yet addressed. In the first two bearish market, the major causes then were cyber attacks. Yet, this time other factors played a more imminent role, such as regulations, declining mining operations, crypto firms bankruptcy, lack of trust among investors and prospective investors. Hence, the bearish fire is not out yet. 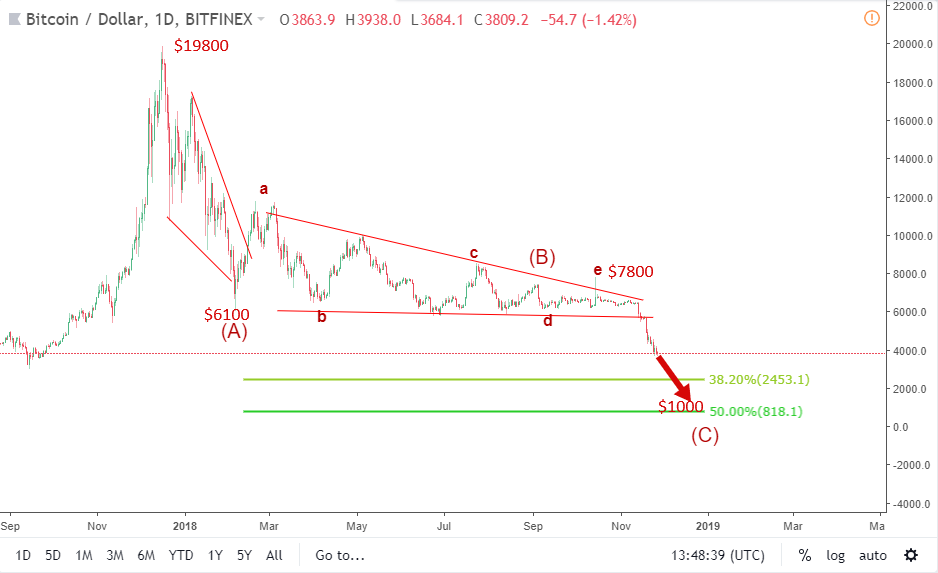 When analysing bitcoin from the technical perspective, the decline from $19800 is emerging into a pattern well recognized- an Elliott wave Zigzag pattern. The first leg from $19800 to $6100 completed a leading diagonal between the last two weeks of December 2017 and first week of February 2018. Since this drop, price has been range-bound to complete a triangle pattern. For a long time, about 9 months, the bulls held price above $5800, despite many attempts to break below it. Finally, the bulls gave up and the sell-off continued as expected. By projection, price could head to $1000-$2000 in December 2017/January 2018 unless a fast break happens back into the $6000-$7000 zone. Based on the two historic behaviours given above, the second expects a price support between $2000-$3000 before the next phase of bullish trend commences. If price goes with the first historic behaviour, $1000 and $175 are the supports levels. Bitcoin may be considered dead if price goes below $175 as that would invalidate its previous behaviours. Often times, price patterns and behaviours are repetitive over time.

What Is Next for Bitcoin?

In the previous bullish trends, price hit $29, $1120 and $19800. The next bullish trend might be slower and less than the previous but it's very likely to go above $100,000 mark. If the price would repeat its previous behaviours. With strong institutions, strict regulations and more high-net worth investors coming in, the cloud of pessimism around bitcoin and cryptocurrency might just disappear for a new wave of healthy spikes. The next bullish trend, if it happens, could take much more time than before, but is unlikely that Bitcoin will end or vanish completely.

Finally, assuming that Bitcoin price recovers fast and prompt, will Bitcoin replace cash? I asked this question to 7Marketz Group CEO Yagub Rahimov, and this is what he said:

"In our modern world, there is general scaling system for everything. If you want to measure the distance you use Meters or Miles, for volume of liquids you use liters or OZ, for weight you use kilo or lbs. Who owns these measurement units? The answer is nobody!

Where do you think Bitcoin price would bottom? Do you think it's dead and it will become worthless? Please share your thoughts with us in the comment box below.

The Crypto Market Is Preparing for a New Rally – Glassnode
Forex Crypto
Top 5 Forex Brokers
Top 5 Crypto Exchanges
Your subscription could not be saved. Please try again.
Thank you for subscribing. You will be the first to receive all the latest news, updates, and exclusive advice from the AtoZ Markets experts.
Everyone is reading
Ripple Agrees to Provide SEC with Company Records
Cryptocurrency Market-Experts Make New Predictions
FCA Publishes New Strategy to Scams and High-Risk Products
close ×