The Gbpusd bearish trend is at a stage that needs to be watched closely. After the breakout of the corrective drive we discussed in our last update, there is more to come downside. With the following intraday GBPUSD Elliott wave analysis, we look at more bearish move . We also look at the condition at which the bearish expectation will be truncated.

19 December, AtoZForex – In our last update on GBPUSD Elliott wave analysis, we looked at what the effect of the last week BOE meeting would have on price movements. We gave our expectations for each outcome based on Elliott wave analysis. Technically, the long term bearish trend was set to resume. An unchanged BOE rate or rate cut, we noticed, would gear price downside. With the proper breakout now confirmed, after an unchanged BOE rate, how deep should we expect price to go? What is our point of ruin- at what price level would the renewed dip be truncated? All these will be answered with our intraday GBPUSD Elliott wave analysis.

The chart below is GBPUSD hourly chart showing the Elliott wave count of the bearish breakout. 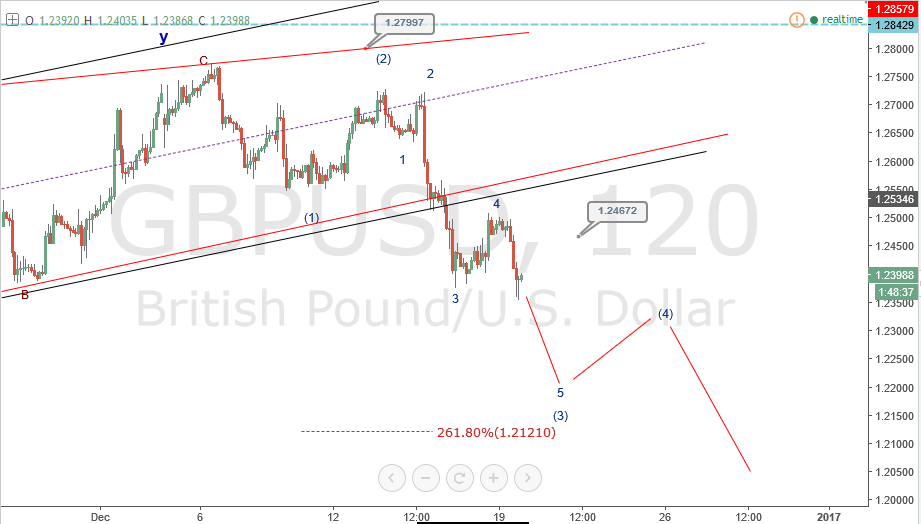 The chart above shows that price is forming an impulse wave. If this impulse wave completes as expected, we will have a stronger bearish bias. After such a correction, price is expected to start the next move with an impulse wave. A correction would mean that the larger correction discussed in the last update is not over yet. Price is presently in the sub-wave 4 of the larger degree 3rd wave of the impulsive breakout. If this is anything to go by, we will see price dipping further to 1.22 or below before a sideway 4th wave. If the impulse wave is large as expected, price will be seen at 1.2 before a large correction upside. 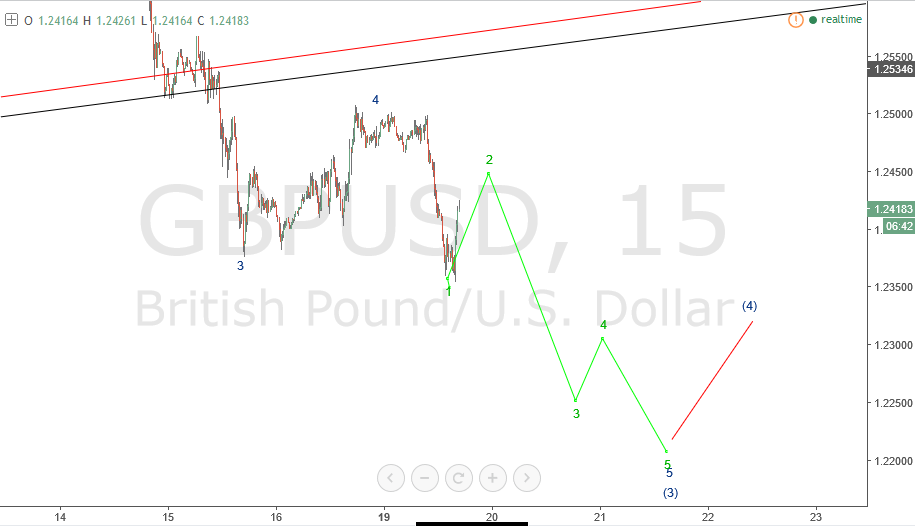 The chart above shows the present intraday price actions. The green projections shows how we expect the bearish move to continue. There will be an initial threat to our bearish view if price breaks above 1.25 with a high momentum.

An unexpected rally above 1.255 will invalidate the bearish expectation to 1.2 -1.22 price targets. This will invalidate the Elliott wave basic rule of the impulse wave that says: wave 4 does not extend into the territory of wave 1. At this point, we would consider the bearish move as corrective and a part of the larger complex correction upside. We will update you as price moves further.

Do you have other views in contrast to the ones listed or you want to compliment them further? Let’s know by your comments below.