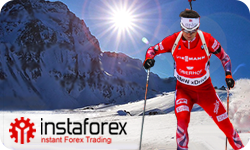 Ole Einar Bjørndalen boasts of great accolades including being the most medaled Olympian in the history of the Winter Olympic Games, with 13 medals, the most successful biathlete of all time at the Biathlon World Championships, having won 40 medals, and 94 World Cup wins.

Pavel Shkapenko, business development director of InstaForex in a statement about the deal said:

“Usually, people would say that Bjørndalen is a perfect choice for our company. But that would be a clear understatement. Ole Einar is a phenomenal athlete, people like him are born once in a century. The partnership with Ole Einar emphasises our commitment to live up to such a high standard. We feel extremely honoured and look forward to successful cooperation.”

“Throughout all my career I was one of the main innovation drivers in Biathlon, constantly trying to bring new technologies to reach perfection, be it preparation techniques, rifle and most recently the ski sticks. InstaForex is a highly innovative company working at the cutting edge of technological progress in finance. And that’s why I think this is a perfect match for me,”

As Instaforex partners with Ole Einar Bjørndalen, this adds to one of many endorsement deals by the firm. It also presently has lucrative deals with World Chess Champion, Magnus Carlsen and former Tennis World Champion, Victoria Azarenka, as well as with English football team, Liverpool FC.