15 January, AtoZForex – A mezzanine floor has collapsed on the Indonesia stock exchange building in Jakarta, leaving no less than 70 people injured. The Police surrounded the complex as many people evacuated the building in panic. Many of who were reported injured were students who were present at the floor when it collapsed.

A dramatic  CCTV footage captured the moment of collapse. The video shows a group of more than 30 students gathered on the mezzanine crashing into the lobby during the collapse.

Police say that were no fatalities. Only 72 people were hurt with minor injuries and are being treated in three different hospitals in Jakarta. There were fears of a bomb explosion but the Police debunked the idea. A student, Alfita, 20, who escaped with minor bruises told Reuter news agency;

“There was a rumbling noise but it wasn’t an explosion. It was like something had fallen, and suddenly the floor we were standing on fell away,”

The director of the Indonesian stock exchange, Tito Sulistio, said on Metro TV,  “I can definitely confirm there are no deaths.” Jakarta police spokesman Argo Yuwono told reporters:

“The accident happened at the first floor … It’s a floor where many employees pass through … There are some victims but they have been taken to a nearby hospital,”

A Metro Tv reporter who was at the building, at the time of the incident, to cover the Indonesian stock market said: “There was a loud bang so people who were inside immediately ran outside of the building,” said journalist Marlia Zein. The image below circulating on the social media shows a damaged metal structure around a Starbucks cafe near the entrance to the lobby. 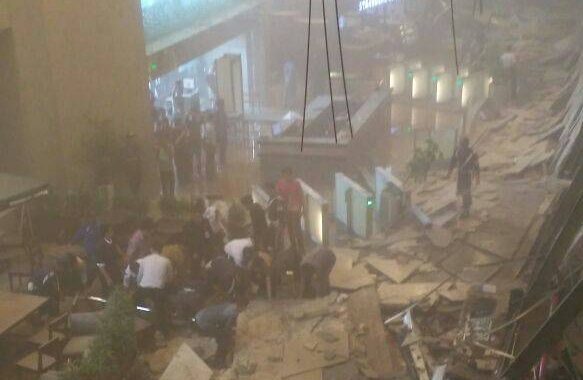 The scene at the Indonesia Stock Exchange after a structure collapsed inside the building. (Photo: Traffic Management Center Jakarta/Twitter)

According to the Indonesian stock exchange website, the building is located in central Jakarta. is part of a two-tower complex which was the target of a suicide bombing by Islamist militants in September 2000. Business activities have resumed on the stock exchange.