When the Germans said Nein!, they seem to have meant. Reports from the Eurogroup meeting yesterday show that talks between Greece and its Eurozone counterparts have broken down, as Athens tagged a proposal for it to request a six month extension of its international bailout as “unacceptable” leading to an Increased risk of Grexit. Athens was given till Friday to accept the deal or risk expiration of its current bailout program. Greece feels optimistic that a compromise will be met before then, evident from Finance minister Varoufakis ‘s statement: “I have no doubt that within the next 48 hours Europe is going to come together and we shall find the phrasing that is necessary so that we can submit it and move on to do the real work that is necessary,”. Japan’s Prelim GDP q/q showed the country has creeped out of recession, even though figures missed estimates. Quarter on quarter growth was 0.6 percent, lower than the 0.9 percent consensus. The economy went into recession as a result of a fall in consumer spending due to an increase in consumption tax to 8% last April.ss 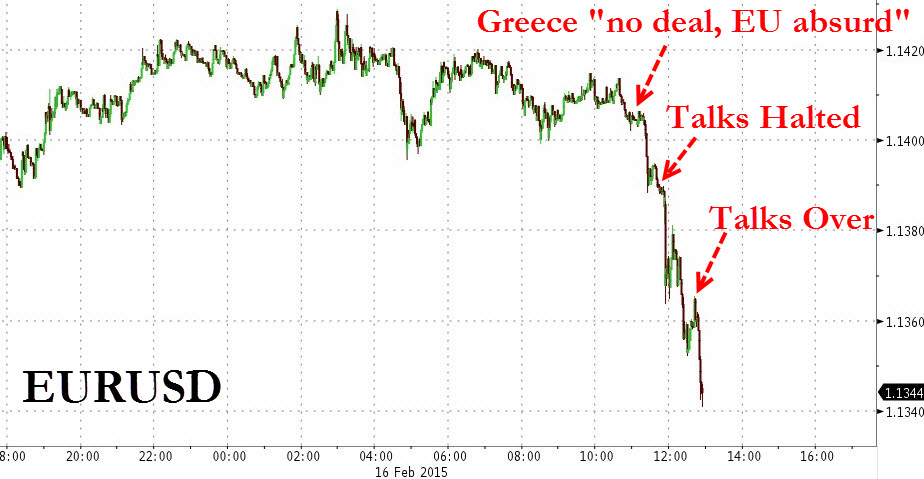 Australia’s Monetary Policy Meeting minutes commenced early this morning at 12:30 am GMT. The report shows the meeting kicked-off with a general discussion about the global economy. The AUD had depreciated by around 9% against the USD since the December meeting. On a trade-weighted basis, the Australian dollar was around 4% below its early 2014 levels, notwithstanding significant falls in commodity prices over the intervening period. The depreciation of the Australian dollar against the US dollar and renminbi had been partly offset by its appreciation against the yen and euro. It was also noted that domestic growth had been slowing according to data released since December. On the basis of their assessment of current conditions and taking into account the revised forecasts, the Board judged that a further reduction in the cash rate would be appropriate to provide additional support to demand, while inflation outcomes were expected to remain consistent with the 2% to 3% target.

U.K’s Consumer price index q/q is due at 9:30 GMT and is forecast to fall to 0.3% from 0.5%. The data which shows change in the price of goods and services purchased by consumers and accounts for a majority of inflation will be closely watched because Gov. Carney said in his speech last week that BOE sees no reason for a rate hike soon and even left open the possibility of a rate cut, depending on how weak inflation proves to be.

German ZEW Economic Sentiment is a leading indicator of economic health, as it’s a survey of about 275 German institutional investors and analysts asking respondents to rate the relative 6-month economic outlook for Germany. Confidence seems to be growing in the European giants as forecast show 55.4, better than previous 48.4.

New Zealand’s Global dairy trade price index is also due today. This is an important figure because dairy production and export account for a major part of the country’s GDP.

Swiss National Bank Chairman Jordan is due to speak at the “Switzerland at the heart of Europe: between independence and interdependence Conference” at the University of Brussels. Not much is expected, but considering the recent stunt by this Central bank to adopt negative interest rate and its sudden removal of the 1.2 EURCHF floor, it will be rather wise to follow all available information.