The blockchain-oriented smartphone Exodus HTC developed by the Taiwanese consumer electronics manufacturer recently announced a collaboration with Opera’s web browser and also reported adding support for several DApps. The news was revealed in a series of tweets on February 26 from both companies.

The Taiwanese mobile giant made its announcement during the World Mobile Congress, which takes place on February 25-28 in Barcelona.

HTC revealed a plan to expand the range of cryptocurrencies adopted for its blockchain smartphone. According to the Exodus HTC representatives, the company will include litecoin (LTC), bitcoins (BTC) and the BNB token of the Binance exchange. Exodus currently supports payments in ethereum (ETH). Moreover, as the HTC officials stated, their crypto-friendly device will soon be available for purchase not only in crypto but in the U.S. dollars and other fiat currencies.  Previously HTC Exodus was only available for purchase with bitcoin or ether. 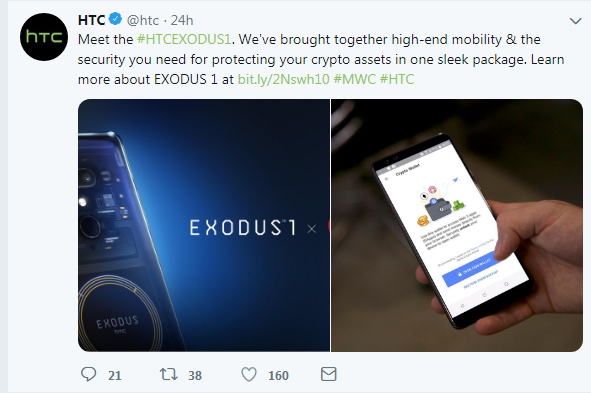 HTC Blockchain Smartphone will be available not only via the Internet

“Now you can pay the amount, for example, 0.00002 ETH (equivalent to approximately $ 0.0027). And never in the history of micropayments, it made sense. The transaction will be charged, or you will have to share the income with the app store. "

At the moment the $ 699HTC product can be purchased only via the Internet. The decentralized director of HTC, during one of his interviews, said that HTC will work to potentially start selling the Exodus HTC device in the operators' stores. He noted, that conversations with these operators are still at an early stage. "We already had a preliminary conversation, but part of why we are going to the Mobile World Congress is talking," he added.

During Barcelona Mobile Congress the company made another announcement. The company stated, that its Android smartphone Exodus will support more decentralized applications (DApp). Support for Etheremon and Decentraland DApps will be launched in Exodus integrated ZIONVault cold storage. Moreover, according to the local media reports, the smartphone now also supports a Taiwanese DApp called Numbers. Numbers track user data and allow them to sell their data to third parties for the cryptocurrency while retaining both controls over the transmitted data and transparency for companies interested in data. The previous compatibility with a blockchain phone included support for a crypto-wallet and CryptoKitties DApp. “Now not only can users own their data, but it forces companies to be more transparent about how that data is used,” says Phil Chen, who is also the founder of the Vive virtual reality headset at HTC.

HTC also announced during congress an integration of EXODUS with the Opera web browser. The addition of Exodus to Opera’s browser allows users to access the browser’s built-in cryptocurrency for payments and micropayments on websites that support it. Chen also mentioned that the next step for the company is the creation of each phone, which it defines as the “partial node” of the blockchain, in order to facilitate trade between phone owners. Chen expressed his hopes to have 80 percent of the most popular dapps loaded onto the phone, with Opera being just “the beginning.” 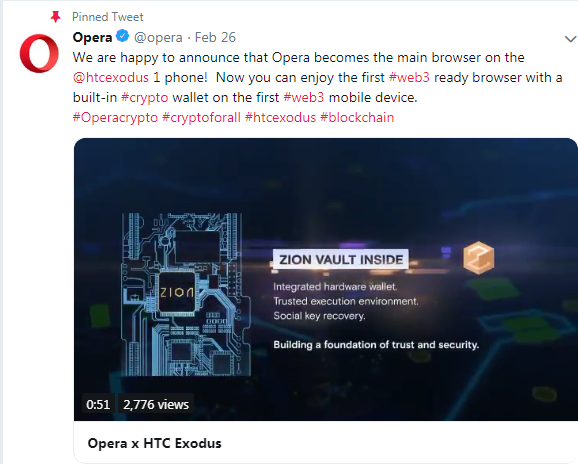 In his latest interview  Opera Browser’s head of crypto, Charles Hamel said that the company was “proud to partner with EXODUS and together define a new standard for usability and security of crypto.” Hamel added:

“We are at the dawn of a new generation of the Web, one where new decentralized services will challenge the status quo. HTC and Opera decided to be the first to step up and enable this transformation.”

Opera was the first full-fledged browser to adopt cryptocurrencies. In July 2018, the Norwegian company launched the internet browser with a built-in cryptocurrency wallet with its Android mobile application.

Enabled by the Zion Key Management API, Opera users on the Exodus will be able to make direct micropayments to content-focused websites — using their private keys, which are stored on the device, for example. Additional decentralized apps (Dapps) that are using the new API at launch include Blockfolio, a cryptocurrency portfolio tracker, and Numbers, an AI-powered platform for devices that tracks walking, sleeping, and driving behaviors. As was reported earlier in February, the main version of the Opera browser for Android now has a feature that allows users to purchase Ethereum through the browser. In addition, recently there was news that the new Samsung Galaxy S10 smartphone will contain a cryptocurrency store with private keys.