EURUSD dropped close to 1.13 with an increasing worries of global growth outlook. Ahead of important economic events, what could happen next? The following give insights based on Elliott wave theory.

January 03, 2019 | AtoZ Markets – The year started with EURUSD close to 1.15 from 1.1215. Apple lowered their revenue outlook, giving unexpected slowdown in China as the main reason for their low sales. In a flash crash, Yen gained, AUD and NZD dropped while the Dollar was 0.3% weakened. EURUSD, as a result of a weakened Dollar, recovered more than 70 Pips in the Asian session to hit 1.1375 from 1.1305. The massive drop from 1.1495 might have shifted market sentiment back bearish. The manufacturing PMI data from the US will be released today before the high impact employment data tomorrow. What price patterns are emerging and the important levels to look out for?

When price hit 1.1215 in November, it ended a bearish impulse wave that dominated year 2018, with an ending diagonal pattern. After this, it was expected that a 3-wave correction would happen upside. The rally started from 1.1215 and was initially expected to 1.2 if the correction would go modestly deep. For 6 weeks, price continued upside but the corrective pattern emerging was looking shallow. Immediate bullish target was then expected around 1.155-1.16 but the correction didn't go as far. The bullish corrective pattern ended with a zigzag with a diagonal mouth just few pips below 1.15. Price dropped afterwards. What could happen next? Will price break below 1.1215? 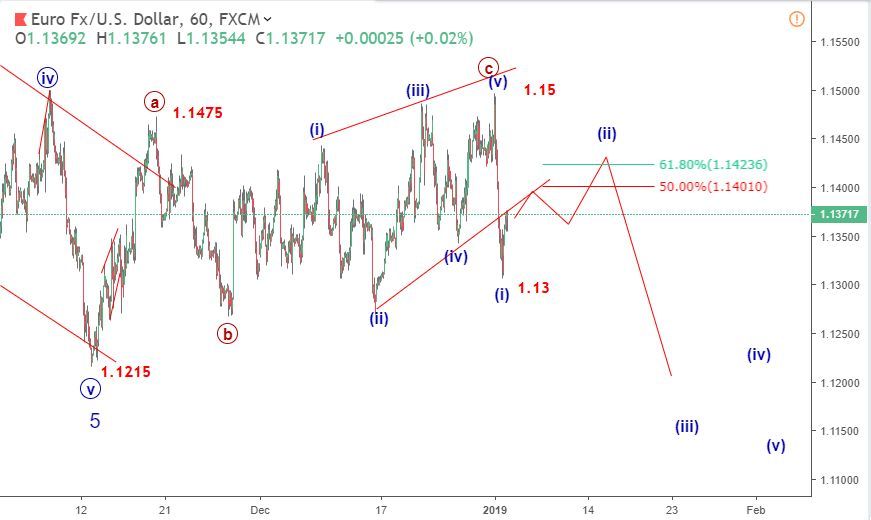 The drop from 1.15 to 1.13 was a response to the bullish zigzag pattern that started at 1.1215 and ended just below 1.15. The drop was close to 200 Pips. A corrective rally to 1.14-1.145 region might happen before price continues downside. A break below 1.13 will eventually see price to 1.1215, below which the bearish trend continues. Is there an alternative scenario? 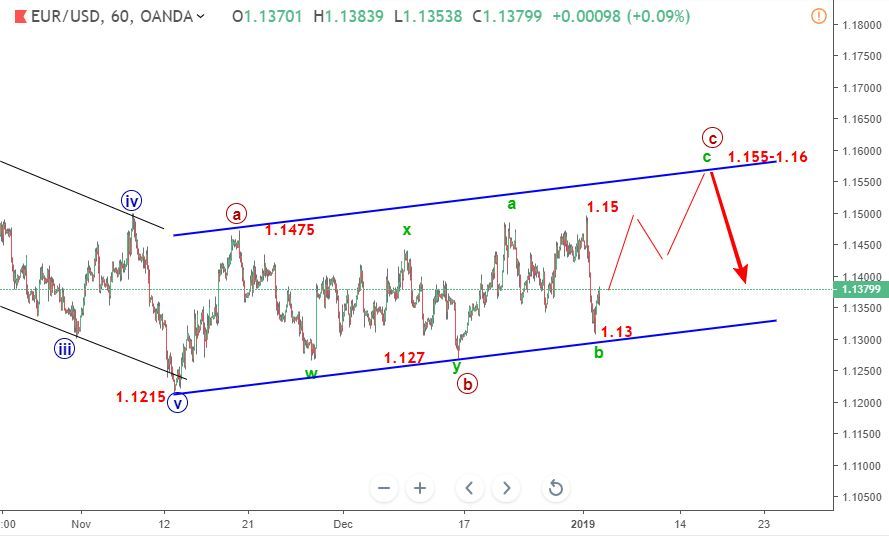 The alternative scenario above has the same possibility of happening as the first scenario. Since Euro bottomed at 1.1215, the resultant rally has been sideways, spending most of that time within 1.15 and 1.127. There is now a support zone of 1.127-1.13 which if broken downside would see the bearish trend continue (this goes well with the first scenario). However, the bullish corrective pattern might take one last move to 1.155-1.16 before finally dropping. This will see price breaking above 1.1475-1.15 resistance zone. These two scenarios show downside sentiments. Unless a fast rally happens far above 1.16, Euro is still in the bearish mood.

Fed Remains Optimistic and Leaves Monetary Policy Unchanged
Forex Crypto
Top 5 Forex Brokers
Top 5 Crypto Exchanges
Your subscription could not be saved. Please try again.
Thank you for subscribing. You will be the first to receive all the latest news, updates, and exclusive advice from the AtoZ Markets experts.
Everyone is reading
SEC Lawsuit Against Ripple May Drag On Until 2022
Ethereum Facing Support Around $2,300 Price Area - Will Strike Upward?
Danske Bank Rejects Cryptocurrency Trading
close ×