How strong is dollar in the wake of the Federal Reserve decision to raise interest rates? Dollar index is at 103.140, after hitting 14-year high earlier.

16 December, AtoZForex – The USD extended its gains against a basket of six major currencies on Friday. On Thursday, the dollar index reached a 14-year peak, as markets adjusted for the faster interest rate hike pace in 2017.

How strong is dollar after Fed rate hike?

The USD has been gaining since the US elections, where Donald Trump left back Hillary Clinton. Mr. Trump promises to execute corporate tax reforms and increase the fiscal spending.

This Wednesday, the Federal Reserve (Fed) has raised the borrowing costs across the US by quarter percentage, from 0.50 to 0.75. Yet, the move was widely expected and itself did not put any pressure on the market. What did influence the markets was the post- announcement FOMC press conference. Fed policymakers projected as much as 3 rate hikes in 2017.

The 10-year Treasury note yield advanced to above 2.6 percent on Thursday, following the Fed news. It has marked its highest level since September 2014. Moreover, Japanese Yen dropped to a 10-month low against the USD in the wake of the news about Fed rate hike decision. The USD last appeared at 118.20 yen, firming 2.5 percent for the week.

Overall, Yen has depreciated 11 percent versus USD since Trump got the place in White House last month. That time, Mexican Peso was named the worst performing major currency, as it dropped 10 percent against the greenback. US inflation data indicated consumer prices improved in November, yet the underlying trend continued to signal strong inflation pressures. This could further support faster interest rate pace in 2017.

The dollar index, which is measuring the USD against a basket of six major currencies, emerged at 103.140. 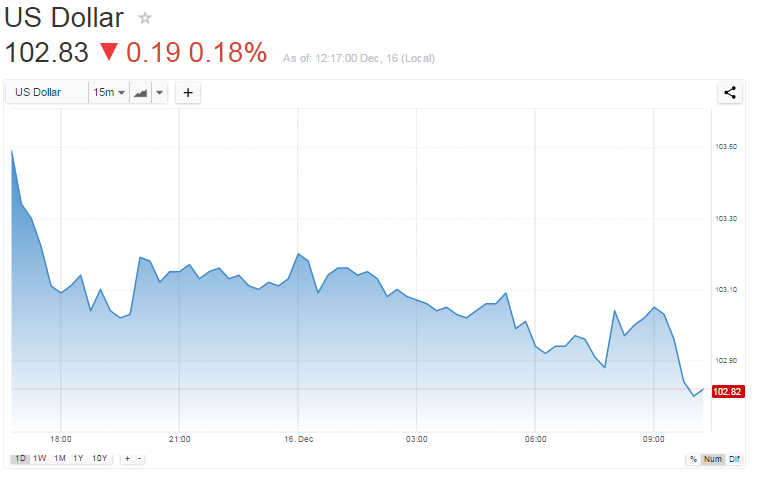 The EUR was slightly changed at $1.0427, after dropping to $1.0366 on Thursday. The FX strategist at Daiwa Securities in Tokyo, Yukio Ishizuki, has stated:

“The euro’s decline has picked up momentum after a break of key support level around $1.05. The euro is likely to be volatile as the markets closely watch how low the currency would drop.”

The pound has recovered after dropping to a three-week low versus USD overnight. The Sterling emerged at $1.2405, down 0.1 percent. The Bank of England (BoE) stated that GBP firm performance could cushion an expected boost in the UK inflation next year. The BoE policymakers decided to keep the interest rates unchanged at 0.25 percent.