17 June, AtoZForex – Morgan Stanley’s poll tracker is showing a 47% probability of a Brexit, and thus the investment bank would assume that the FX markets are pricing around this probability.

There has been a strong correlation between the performance of GBP's TWI, the betting market probabilities (Exhibit 16), and EURCHF. The performance of currencies in the latest shift towards "Leave" vote (Exhibit 18) could provide a guide to how the markets may respond on referendum date. In line with Morgan Stanley’s view, the risk-sensitive currencies have tended to depreciate the most versus the USD, while safe haven currencies appreciated. 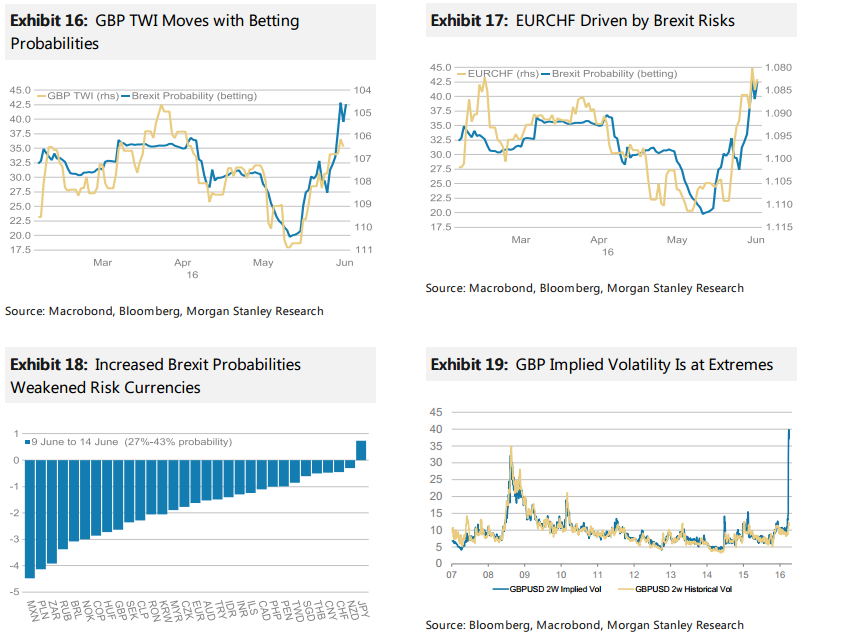 How G10 currencies trade in case of Brexit

GBP: Most vulnerable currency among the G10 and EM. Weakens from uncertainty surrounding the UK economic growth and politics. “Any commentary from David Cameron and Boris Johnson will be watched by the markets to determine the short-term path for GBP” Morgan Stanley added.

EUR: Would weaken initially as markets debate the integrity of the whole European project and whether another country, like Greece or Spain, could follow the UK suit. “After initial weakness, EURUSD may stabilize around 1.05 as the current account surplus and low global risk appetite mean that eurozone funds find it difficult to find investment opportunities abroad, thus stopping EUR's decline,” MS noted.

CHF: Strengthen initially since this is a European related risk event. “We expect the SNB to intervene  in EURCHF to prevent any rapid volatile fall but not to actively weaken CHF. Our assumption would be that it intervenes if EURCHF is heading below 1.05 within a day,” Morgan Stanley projected.

CAD, NZD, AUD: These commodity currencies have fairly small trade exposure with the UK so could be relatively stable in the first-round impact from Brexit. More important are the global risk environment and commodity prices. Since China has a large proportion of trade with the EU both n import and exports, any global trade slowdown would weaken AUD the most within this group because of Australia’s close ties with China.

Also see: What does FOMC meeting mean to you?