21 August, Cyprus news – Many Europeans expected Cyprus to go bankrupt and leave the EU in 2013 when the banking crisis hit the Mediterranean island paradise. However, Hedge funds and foreign investors saw an opportunity in this crisis. Immediately after the 2013 Cyprus banking crisis hedge funds were looking to invest in Cyprus banks. They were expecting quick earnings after banks regained their capitalization. However, why are hedge Funds losing money in Cyprus Banks now?

Since 2014 big shareholders like Lamesa Holding, Td Asset Management, EBRD, Renova Group and Bolerstone Trading have collectively contributed as much as € 507.1 million for the Bank of Cyprus recapitalization.

Lamesa Holdings invested in Bank of Cyprus on May 2015. Following 2015 investment, it appears that they have bought Bank of Cyprus shares at the beginning of 2016 again, in order to reduce their losses. 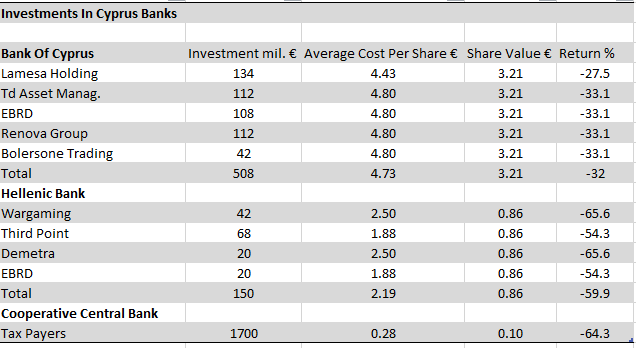 Total value of the investment of Wargaming, Third Point, Demetra, EBRD at Hellenic Bank sums up to €149.7. However, this portfolio has lost as much as 58.2% of its value.

Wargaming Group Limited invested in Hellenic bank in 2013 as much as €42.1 millions for 16 million shares. After the Wargaming Group’s 2013 Hellenic investment they purchase additional shares in order to reduce their losses. However, even that has not paid off. Wargaming group has lost 65.6% of their investment so far.

Taxpayers lost the most

While investment groups lost money in Cyprus banking system, the biggest loss was sustained by the Cypriot taxpayers. According to the report, Cyprus Tax payers lost over 64% of their money in Banking shares.

Why are Cyprus bank shares not performing well?

Although the economy turned around in Cyprus after the 2013 banking crisis, the Cypriot banks sustained their reputation losses. Local Cypriot people have lost their trust to their local banks it appears.

At the moment, the local economy is also developing and diversifying. While we could only see Forex and Shipping industry developments a few years ago, now we see the Tourism developing as well. With the oil and gas discovery, we can also expect to see an increase in foreign direct investments.

Meanwhile, local Cypriot will also gain their trust in their local banks as well. This just requires time and patience. While, some may see it as a drawback, as a Cypriot living in Nicosia I do see and feel developments in the Cyprus Fintech ecosystem. However, I do expect a turnaround in the Cyprus banking industry within the next 24 months.