HBSC made headlines after the release of its annual report, mostly for negative reasons as the firm reported a 17% dip in profit at $16,680 million, reports of the CEO, Stuart Gulliver’s clandestine £5 Million Swiss account was revealed and the Bank declared an additional $550 million set aside as contingency funds to cover possible additional fines in the FX manipulation case. 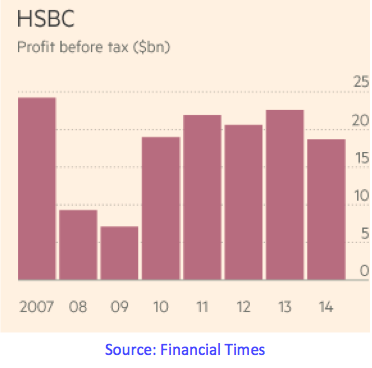 The UK giant recorded a 17% drop in profits compared to 2013, attributing this to “significant items including fines, settlements, UK customer redress and associated provisions.” Customer accounts where down as well, reporting a decrease of $17,429 million from 2013 to $1,350,642 million, which can be clearly seen from the chart.

The highly publicized year-long FX manipulation probe which resulted in a $4.3billion penalty for six of the worlds biggest banks seems to still be ongoing as individuals have been to the list of targets by authorities for investigation. With the investigation far from over, HSBC reported to have set aside $500 million contingency funds to cover possible additional fines that may arise from this case. This is in addition to $611 million already paid in settlement to the UK and US authorities for its part in the London rate fix scandal. This was revealed in the statement;

“The remaining investigations and reviews in the UK, the US and elsewhere are ongoing. Based on the facts currently known there is a high degree of uncertainty as to the terms on which they will be resolved and the timing of such resolutions, including the amounts of fines and/or penalties, which could be significant. As at 31 December 2014, HSBC has recognized a provision in the amount of US$550m in respect of these matters.”

This comes amid reports of CEO, Stuart Gulliver’s clandestine £5 Million Swiss account were also revealed in a file leaked to the press. Attempts have been made to cl 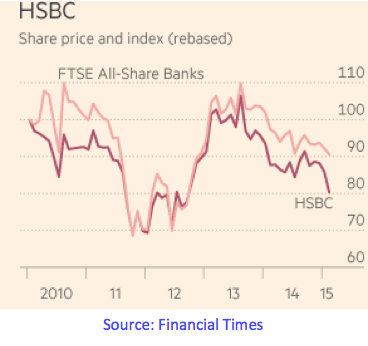 ear the air as to any foul play involving this account as an HSBC spokeswoman issued an official statement addressing the issue, clarifying that the CEO used the HSBC Swiss account during his stay in Hong Kong to hold his bonus payments prior to 2003.

Gulliver’s lawyers also justified this by stating that he was and still is tax domiciled in Hong Kong and that Hong Kong tax was paid on this income in full accordance with the law of the state. However, Gulliver apologized for the scandal that has left its chief executive facing questions about his personal finances.

Shares in Europe’s biggest bank by assets, were down nearly 6% in afternoon trading in London on Monday as HBSC’s barrage of issues continues.