While everyone is watching the referendum results eagerly with “YES” expectations, it seems like Greece voted NO already. 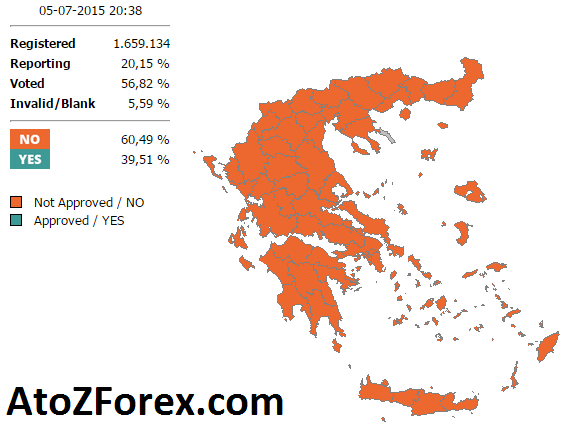 What is next? Drachma? Grexit?

The situation is going to be quite challenging. As the leaders of the major lending EU countries such as France and Germany are meeting tomorrow, Monday, where they will be discussing the results of the Greferendum results.

As the country gave their signals to the world about their position about the next potential step, the Greek banks are rapidly running out of cash, hence the Greek Central Bank is likely to formally request ECB to expand its emergency liquidity. Failing to expand the ELA program is likely to be translated as failing to keep the Greek banking system from collapsing, as there are long queues in front of ATMs in Greece.

Last week the Greek Prime Minister as well as the Finance Minister both commented that banks would be opened right after the referendum. It has been exactly 9 days since the Greek banks are closed, foreign transfers are banned, and cash withdrawals are limited to EUR 120 per person per day in an effort to limit the amount of cash that people can take from their bank accounts every day.

The following are the most googled Greece related querries at the moment:

–  What does the No vote mean?

–  Will EU and IMF provide a new easy bailout program?

–  Will there be Greek Haircut like we had in Cyprus haircut three years ago?