24 February, AtoZForex.com, London – Lately, the relationship between Crude oil and EM currencies strengthened. After the 2014 oil price crash, markets seem to have become especially sensitive to day-to-day lactations in the oil price.

Goldman Sachs suggest that the relationship between EM FX, and for that matter commodity FX, and oil may take time to fade as this post-oil crash sensitivity ‘wears off during what Goldman Sachs Energy team expects to be a volatile and trendless crude oil market in the first half of 2016.

The Energy team has argued that, over the H1 of 2016 and potentially beyond, crude oil market will feature increasing volatility over a relatively stable and cheap prices – a trendless and volatile market produced by re-balancing of supply and demand. 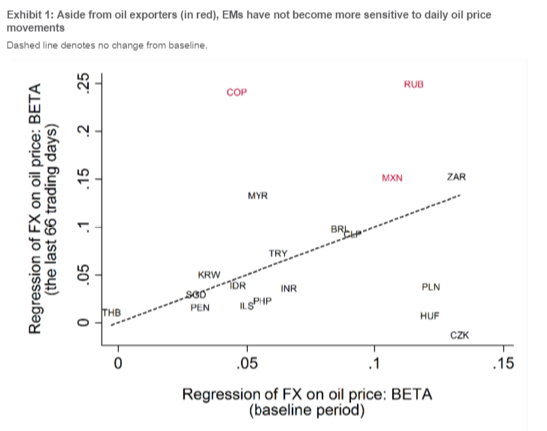 Such oil market would imply several thing for the EM FX. While Exhibit 3 suggests that higher volatility would even further increase the day-to-day role for oil in EM currencies, Exhibit 4 provides some cautionary context 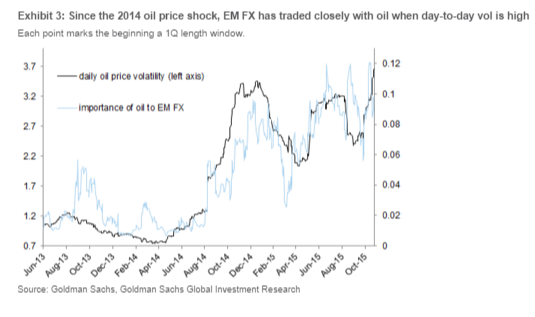 “We suggest that the key difference between the early 2000s and today lies in how oil price fluctuations are interpreted by the market,” Goldman Sachs noted. Given the drastic 60% decline in oil price during the summer of 2014, it is natural that market participants are focused on each daily movement in the price. Goldman Sachs also suggests that, “in a volatile and trendless oil market in 2016H1, it may take some time before this effect ‘wears off.”

Lastly, the importance of the crude price for EM FX going forward will depend on the extent to which countries remain to allow their currencies to respond to terms-of-trade shocks.

“Exhibit 1, for example, indicates that the sensitivity of the RUB to the oil price has recently increased, which is likely attributable, in part, to the recent liberalization of its currency,” Goldman Sachs finished.

Therefore, we can continue to see Oil & EM FX correlation and expect the currencies to trade suppressed until oil price rebound.

Fed: The Taper Will Have a Reduction–The Rates Will Not Go Up
Forex Crypto
Top 5 Forex Brokers
Top 5 Crypto Exchanges
Everyone is reading
Shiba Inu (SHIB) Fell 26% After Elon Musk’s Tweet – Is the pump over?
Second US Bitcoin ETF Set to Launch on Friday
Ripple Partners with Pyypl to Launch RippleNet’s ODL Deployment in Middle East
close ×