10 July, AtoZForex.com, Limassol – US Fed interest rate hike expectations and a decline in oil prices, has forced USD/CAD near its January’s highs. Goldman Sachs believes that the bulls will soar further into next week pushed by Bank of Canada’s (BoC) meeting results.

“Next week’s Bank of Canada meeting has the potential to surprise on the dovish side, adding to CAD underperformance,” GS projects. At the very least, the meeting should announce meaningful downgrades to the BoC’s growth forecasts, revised by April’s lower GDP figures and disappointing export numbers for May, Sachs adds.

Further commenting on second quarter report and the renewed decline in the oil price: "In particular, we think the BoC’s 1.8% qoq annualized forecast for Q2 is likely to fall at least as low as 0.7% – and potentially even lower," argues Goldman Sachs USDCAD. 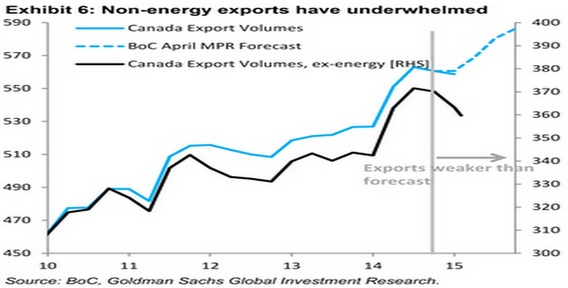 On top of this, Goldman Sachs has laid out another source of concern, emphasising on the sluggish trend of non-energy exports, as these have shown weakness over recently. Alongside, the renewed decline of oil prices will also not depict any aid on the activity outlook, according to Goldman Sachs.

To support Goldman Sachs' view, oil experts, including Morgan Stanley bank, see current oil prices as a bottom low and an opportunity for investors with very favourable risk/reward ratio. Stated in a new report by Morgan Stanley Research analyst, Ole Slorer, and published on Thursday, the tide is finally starting to turn for global oil services stocks. Depicting a very favourable up to 60% upside reward and only approximately 10 percent downside risk over the next 6 to 9 months.

In contrary, banking company’s Nomura Holdings, Inc. technical analysis of Lonnie’s 5-wave move predict an A-C correction. “The rally from 1.2128 to 1.2771 has met equality with the previous rally from 1.1929. This and the fact that 5-waves up has been satisfied suggests a pullback ahead … to 1.2531 would be ideal and meet pivot and Fib support. The 38.2% retracement aligns nicely with the previous wave-4 low” projected Nomura.